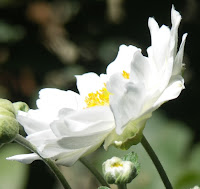 As I mentioned, the Nice Man At Barneys gave me several samples of Yosh perfume oils. This morning I remembered my statement that white flowers generally leave me unmoved, and, contrarily, put on a couple of drops of the Yosh White Flowers sample.

A side note: Perfume oils are strong! My two-drop application was excessive. A smear from a stopper that's already been wiped off on the bottle rim would probably be closer to the right application, if I were working with the real bottle. This means that the apparently horrifying price is actually much more reasonable than it seems, in terms of the number of wearings that a person would get out of a bottle.

A second side note: So what are white flowers? I think of the phrase as meaning a mixture of tuberose, lily of the valley, jasmine, narcissus, and the like. Not just flowers that are white, but flowers that happen to be white and have specific strong, sweet scents, scents that often have a hidden agenda. They have notes referred to as animalic and indolic and other words that, as I understand it, refer to some of the scents of bodies and food and decay. I'm just going to point you to the "skank" post on Perfume Posse and an "Indolic?" thread on Basenotes and then run away from that subject.

So, yes, this is white flowers. Lots of them.  I think I was looking for something softer, shyer, and more buttery - this is "perfumey", fairly high-pitched, fairly aggressive, with a lot of projection and sillage. This may not be an entirely fair assessment, since I probably used too much. I'll try again, but even hours later, it doesn't seem to have changed its nature, just its volume.

I should note that I don't like flower bomb, femme fatale scents. Someone who does might absolutely adore this. It's a fine, high quality, complex flower bomb, though, speaking of indolic or not indolic, it seems very, very clean. Sparkly clean. This is all sunshine and no shadow.

I like it enough to wish that I liked it better. I'm going to try it again with a lighter application, and also try layering it with a simple wood-heavy fragrance, like Art of Shaving Sandalwood, or maybe I'll get a straight cedar accord from CB I Hate Perfume.

And maybe I'll also layer it with an incense, like Serge Lutens Serge Noire. I like my mental visual of Serge Noire -  a desert of blowing powder-fine black sand, wider than the eye can see - combined with my visual of this one - a huge and endless stream of white flowers spilling past one's gaze. Black and white and endless. Yes, I realize that mixing visuals is not exactly a recipe for mixing perfumes, but, hey, where's the harm?

The tiny vial should be enough for several experiments, and enough to pass on much of it to a lover of femme fatale fragrances, in the hope that Yosh might get the sale that it probably won't get from me.

Review Roundup: I can't find any reviews! (Update: Ha! Got one from Sweet-Diva.)

Oh, and a last side note, speaking of white flowers: Remember how I said that Van Cleef & Arpels Muguet Blanc left me completely unmoved? Yeah. I was wrong. It's coming to mind regularly. Frequently. I'm going to be getting a sample.

Edited to add a link to an interview with Yosh Han from +Q Perfume Blog.
Photo: Mine
Posted by Martha at 6:49 PM