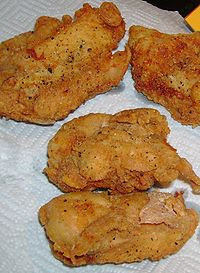 It's delicious. It's evil. It's fattening. It's saltycrunchygreasy. It's got all that going for it.

It's also a food that cannot successfully be mass-produced. Real fried chicken is pan-fried in shallow fat, watched intently by a focused cook who dodges grease splatters while waiting to turn the pieces at exactly the right moment.

Deep fried chicken can be a perfectly edible, even enjoyable food, but it's just not in the same class.


And the crunch isn't about batter - it's about getting the skin rendered to perfect crispness, without destroying the meat in the process. Just dredging the pieces in flour is plenty, for breading. And the flavor isn't about spices - salt, preferably applied an hour or so before cooking, is plenty for seasoning. Fried chicken is simple ingredients transformed by careful cooking into full-on luxury gluttony.

Restaurants that do this are increasingly rare, and even home cooks rarely seem to make the real stuff. Our friends seem startlingly delighted to eat the stuff, and I don't think(??) that's just flattery.

So what's the technique? Alton Brown's recipe has a good technique for a fairly rapid-frying method, though I skip the buttermilk marinade and the spices and just dredge lightly salted, barely damp chicken pieces in plain flour.

Or there's the slow method. (It's Mom's method. Hi, Mom!) This sacrifices appearance and some juiciness of the meat, for a superior crust:

• Use bone-in, skin-on chicken pieces and a good-sized frying pan with a lid, preferably a high lid. (Or more than one pan, when you're practiced enough to tend that much chicken.) Use enough chicken to just barely fit in the pan with the lid on.
• Rinse the chicken, to get it damp enough for flour to adhere. Salt it on both sides. Ideally, put it in a ziptop bag and let the salt sink in for an hour or so.
• Pour an inch to an inch and a half of oil - corn, canola, your choice as long as it can take the heat - in the pan (or pans) and start heating it on medium to medium-high heat.
• While waiting for the oil to heat, shake several pieces of chicken in a bag with plain flour, until they're well-coated with flour.
• Put a test piece of chicken in the oil. When it starts to sizzle moderately enthusiastically, add more, and fry until both sides are halfheartedly brown, perhaps five minutes.
• Take the still-nearly-raw chicken out and put it on a plate, while similarly flouring and browning the remaining chicken pieces.
• When all pieces are browned, pile all the chicken back in the pan, turn the heat down a bit below medium, and put the lid on the pan.
• Cook the chicken at this relatively low heat, with the lid on, for twenty minutes. Lift the lid and shuffle the chicken around every seven minutes or so, moving the chicken that was in the oil up into the higher levels, and the chicken that was on the top down to the oil.
• After the twenty minutes, remove the lid and kick the heat up again, to a little higher than medium. Keep shuffling the chicken around, giving each piece enough time in the oil to get a crisp and brittle crust.
• Drain the chicken on paper towels.

This chicken has a greasier, crisper, and generally more luxurious crust than that made the faster way, and keeps that way in the refrigerator. And since all the chicken is cooking at once, instead of being fried in small batches, it's actually done sooner than the faster way.