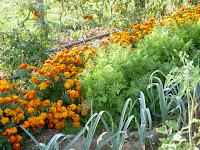 So there's a problem with our kitchen garden: We don't eat the vegetables.

We just don't. I walk through the garden and eat a pea here and a bean there, and I nip off a bit of a lettuce leaf, and sometimes I even get a squash blossom indoors and fry it in butter, but most of the perishable, harvest-them-now vegetables like lettuce and beans don't get eaten.

So it's silly to grow vegetables.

But on the other hand, a potager is, well, pretty. There's something very satisfying about those rows of little squashy lettuces or neatly spaced onion shoots. Productivity, fertility, food in the making!

Except for the not-eating-it part.

So what to do?

Well, part of the solution is perennials. With perennials, I don't feel so silly not harvesting the crop, because I'm just letting it get stronger for next year. Really. Would I lie to you?

So we filled much of the vegetable plot with raspberries - which, as it happens, we do eat. Not reliably - we find plenty on the ground - but enough to keep us from feeling like we're wasting the space. And it helps that at the grocery they're worth their weight in ... well, not gold but maybe zinc, and they turn moldy at the drop of a hat, so having them right outside "for free" is nice.

And we filled another good-sized bit of the kitchen garden with perennial herbs. We've been known to eat those on occasion, and after just a few times spending several dollars for a sprig of rosemary , they start to seem as if they're earning their space, too.

But I still want geometrically arranged rows of ruffly green-tipped-with-red lettuces, interspersed with bright green onion shoots at precisely the right spacing. I just do.

Maybe we need a rabbit.

Photo by Airelle, from Wikipedia Commons
Posted by Martha at 7:30 PM