IttyBittyFictionScraps: In which people think

(The conversation continued, leading me to observe that I tend to do all-dialogue, or no-dialogue. This one is no-dialogue.)

Jane peered into the bakery case as she sipped her coffee. Buttercream. Candied violets. Crunchy sugar. Marzipan. Meringues. The cup was half gone by the time she finally ordered. A plate of a few things, please. A mini cupcake. And one of those little layered things. (And the counter girl showed no amusement or disapproval when she ordered it in exactly those words.) And a slice of yellow layer cake with pale chocolate buttercream.

She sat at the table by the window, the one with the cracked marble top. She finished her sugary lunch, then took out her notebook. Now. Get to work.

Losing the museum director would throw the operation nicely into chaos, but he was management, and management was always distinctly replaceable. A temporary fill-in would be hired, and he might be, well, competent. That wouldn’t do.

So the key was to find those with irreplaceable skills. That might not even require killing anyone. She preferred that, in a mild way, just as she preferred to eat a salad once in a while. The climate control system, for example, was limping along, tended by a head janitor whose primary purpose was to serve as its nanny. Arrange for that man to retire, and the system would break down within weeks, requiring an evacuation of the more delicate bits of art.

IttyBittyFictionScraps: In which people move

So I posted an all-dialogue bit on the writing forum where I hang out, and there was a feeling from some people that occasionally a dialogue tag or even an action or a scrap of setting might be nice. So I wrote this. And once written, let's blog!

Joe ordered his third Howards End, drank it rapidly, and resumed drumming his fingers on the table. How could this have happened? What would they say? Would they ever forgive him?

Joe jolted out of his reverie and looked up at Alice. When did she get here? “Huh?”

She blinked. “A lot of… Nothing. What’s wrong?” She pulled out a chair and sat on the edge.

He took a deep breath. He grabbed the near-empty glass and slurped the last drops of ice-diluted blackberry vodka from the bottom. He kept on slurping long after the liquid was gone, and was reminded of those scenes in the movies where the traumatized character keeps on pulling the trigger on an empty gun. Click. Slurp. Slurp. Click.

“Joe!” Alice grabbed his shoulder and shook it slightly.

He put the glass down. “I lost the map.”

“Oh!” She released his shoulder. “Is that all?”

He stared. Wait. She wasn’t going to kill him? She always carried those knitting needles; he’d imagined himself being impaled, nailed to the chair. “What?”

“Well, it’s not as if I really believed that it led to treasure.” She air-quoted ‘treasure’. “It was just a fun thing.” She settled into her chair, hung her monstrous purse on its arm, and extracted her knitting. “No big deal.”

He kept on staring, and automatically reached for the glass again, but found to his surprise that he didn’t need its comfort. “Really?”

“Really.” She loosened a length of chartreuse angora. “Not a problem.”

“Is that how Stan is going to feel?”

“Oh.” She looked up, halting in the act of winding the yarn around the needle. “Oh.” The second ‘Oh’ was far deeper.

“He’s going to kill me, isn’t he?” He clutched the glass and started slurping again.

“Maybe you’d better run along. I’ll tell him.”
Posted by Martha at 7:00 PM No comments:

(A scrap written in response to the question of, how do you insert description of the narrator a first-person piece?)

Oh, dear God. It was Mom. I plastered on a smile and opened the door.

The smile wavered. "Yes. I told you, I like it short."

"No, dear." She shook her head as she swept past. "It won't do. If you had a chin, that...mass of frizzy blonde might be all right. But with your little round baby face? No. But we can fix the damage. I'm going to make you an appointment with my stylist on Thursday."

"No, you're not." I chased her, glancing frantically around the apartment for evidence of...well, anything. Life. All life must be hidden from Mom.

"You're right." She turned back. "My mistake. Not Thursday. That's the appointment with the dietician."

"Of course you do, dear. I know that you're not technically overweight, but people age. Ten excess pounds today leads to diabetes at fifty."

"It would be different if you had the height to carry the weight. Darling, you know the surveys; women five foot six or over are the ones with the good careers. Why aren't you wearing those heels I sent you?"
Posted by Martha at 7:35 PM 2 comments:

Jane stopped at the end of the alley. What was that? There was movement, just barely, in the darkness. An alley and movement would make a person think of rats, or cats, or raccoons, or some similar unpleasantry—well, not that cats are unpleasantries, but alley cats often are—but anyway, that’s not what the movement looked like. It looked upright. It looked like people. Tiny tiny people.

After another moment of peering, she dug into her purse and extracted her phone. After some fumbling she had the flashlight-whatsit working, and she aimed it at the alley. It barely illuminated ahead of her feet, so she cautiously entered the alley for a better view.

The movement all but stopped as soon as she cleared the pool of light from the streetlight. As she moved forward, she heard the occasional skitter and caught a flash of movement in her peripheral, but her light illuminated nothing. Step, skitter, nothing. Step, skitter, nothing. She was halfway down the alley when she became suddenly aware of skittering behind her. Her heart thumped and she sped up, fast-walking to the other end of the alley, emerging rather quickly into a startled-looking post-theater crowd.

The man that she bumped touched her shoulder briefly and gingerly, saying, “You all right?” He glanced past her to the alley, then looked back to her eyes.

“Yeah.” She looked back too. “Yeah. Fine. Just fleeing the elves.” She smiled at him to make it clear that she was joking. She wasn’t.

“Sure.” He grinned, looking relieved. “Did you leave them a gift?”

“Yeah.” The grin weakened. Maybe he could see the shaking. “That’s what my granny said, anyway. It’s like a toll road; you go through the little people’s country, you leave a gift, or they’ll come get one, and you won’t like it.”

“Oh.” She still looked at him, her banter failing her.

Disconcerted, he offered, “They love tobacco, Granny always said. I could leave them a cigarette on your behalf.” 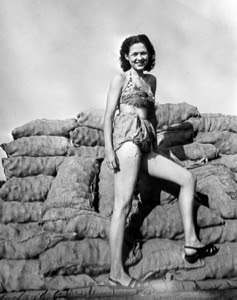 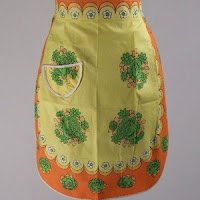 (A scrap that I wrote as part of a discussion of that "show, don't tell" thing, in the writing forum where I hang out.)

Henry opened the fridge and studied the sticky, empty shelves. Half an inch in the milk jug. Broccoli browning on the edges. And that nervous-making smell that signals bad happenings in the depths of the crisper. If Jane were here, this would be the signal for "Grocery time!" in that terrible chirpy Scarlett O'Hara voice. He'd never have to hear that chirp again. Thank God.

But he really wouldn't mind a slice of her meatloaf.

Feh. Who needs meatloaf with a restaurant on every block? He shut the fridge and studied the window, watching as the rain ran down behind the...yeah, yeah, fine, so the glass was dusty, so what? A man has better things to do than chirp "Cleaning time!" and bustle around with lemon oil and a feather duster.

Image: Wikimedia Commons.
Posted by Martha at 4:51 PM No comments: