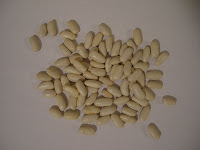 There are a whole lot of garden seeds out there (though not nearly as many as there used to be - look at Seed Saver's Exchange for detail on that problem). So it seems worthwhile to write about the special ones.

Bountiful Bush Beans, a somewhat hard-to-find variety, are my favorite bush bean. The beans have a particularly fine taste and texture, in the "meaty" rather than the "crisp" category. The beans produce for rather longer than the average bush bean.

Really, that's about all, but flavor and a longer harvest are enough to make them my favorite bush bean.