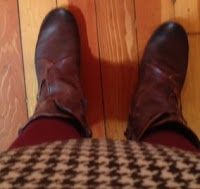 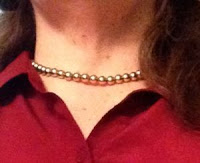 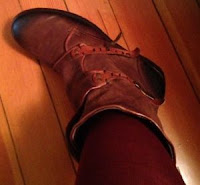 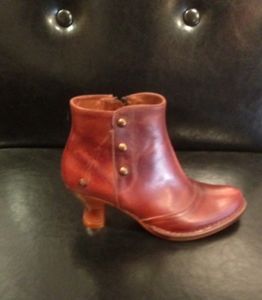 I was just re-reading The Thoughtful Dresser by Linda Grant, and was struck by the bit where the author states that


One day last summer, at the moment of waking, I knew that I had to go out at once and buy new shoes. Shoes which fulfilled a function apart from walking...Ridiculous, sexy, "I don't care how much they cost, I have to have them" shoes.

Her conclusion was that the waking message from her subconscious to buy those shoes was a message to "be seen." I'm still not quite sure what my subconscious is demanding, in pushing this style thing. It might, indeed, be a goal to be seen, after a lifetime of trying to disappear. Or it could be some slushy Hallmarky "love yourself" thing that I refuse to see due to its inherent slushiness.

Today I bought a pair of boots. Actually, I'm going to confess: Today I bought two pairs of boots. (NAYY linkyness: From Village Shoes.) First I bought a moderately practical flat-heeled pair--practical but also dripping with steampunk-chimney-sweep atmosphere. And I took a picture of another pair to see if it would haunt me. I do that now and then--I still have a pair of rhinestone earrings in my phone's camera roll that are still haunting me but not quite enough to inspire me to buy them.

The haunting took effect at record speed. Himself didn't hate the photo of the other pair. With that knowledge, I found myself hurriedly changing clothes to a skirt shape that had more of the Edwardian/Victorian vibe that I get from the boots, called the store to find out how much longer they were open today, and charged down there in the car. I walked out half an hour before they closed. With, of course, the boots.

That's them up there. I have fifteen days to change my mind and return them, but I don't think I'm going to. We've already bonded.