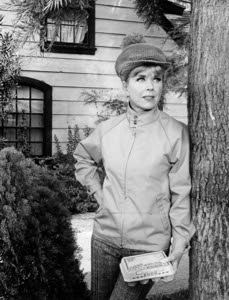 I miss posting fiction. The theory was to stop posting and maybe I'd eventually write something that I could, y'know, submit somewhere, because you can't submit it after you've blogged it. But then I stopped writing fiction much at all. So, here we are. This one is from July, but I don't think I ever posted it.

"But it has to matter. Extra-large eggs are twenty percent bigger. That's more eggshell."

The teacher studied Josh, then sighed. "If you have extra-large eggs, bring two. If you have large, bring three. Then there will be extra."

"Miss Othmar will show you how she wants them peeled."

"But peeling them is homework! You do homework at home!"

Josh's mother studied Josh, then sighed. "You can bring the eggshells in, too, to show your work."

The next morning, Josh was horrified to learn that his father had thrown the eggshells into the compost heap.

"They're filthy! I can't bring those in!"

"I'm sorry, Josh. That's what I always do with eggshells. I didn't know."

Josh packed up the whole eggs and took them to class, where he told the teacher, "I wasn't too lazy to peel them. I peeled some others, but my father threw them away."

"It's all right, Josh," assured the teacher. "These are very nice."

"They're extra-large, but I wasn't sure about the twenty percent."

"So I brought three."

Halfway through making the eggshell picture, Melinda Conner edged over to Josh. "Teacher says you have extra. Can I have some?"

Josh frowned at her. "Why didn't you bring your own?"

"My brother ate my eggs and put the shells in the trash. I would have gotten them back, but they touched the chicken package."

Josh's eyes widened, and they both said it at once. Like an a cappella choir. "Salmonella."

They blinked at each other, and both of them smiled.

Fourteen years later, they were married. With two prenuptial agreements, and a spray bottle of diluted bleach in the kitchen. They were very happy.

Image: Wikimedia Commons.
Posted by Martha at 5:59 PM No comments:

Gardening: Running to keep up

I'm planning the next garden work session. Gardening time is in very, very short supply this year. The next session will be some weeks from now (long story), and ideally would include:

And some other things that I've probably forgotten. This is not a realistic amount of work (18 beds?! Are you mad?) so I need to set priorities.

I ordered three types of potatoes; the "six beds" is based on using up the minimum amount that you can order per variety. So I could narrow the six beds down to three, if my primary goal is trying all three, rather than maximizing the volume of potatoes produced. I could also do some research--could I plant the others much more closely, on the theory of harvesting them as new potatoes?

I think that I'm just going to insert the Jerusalem artichokes in the ground, any bit of ground, with  no particular prep. Hopefully they'll sprout there rather than rot, and maybe I can transplant them later. That's assuming that they survive in the wait, in the fridge.

The onion sets can produce scallions or be left alone to produce bulb onions. Can I plant them fairly thickly, thin out the scallions, and expect the remaining onions to make bulb onions? Or will that involve too much competition or root disturbance for the bulb onions to happen? Research.

The cosmos tolerate quite poor soil, but...well, I should forget the "but". I could cut some drills in the weed barrier, scratch the soil, plant the cosmos. By the time I would have time to prepare those beds thoroughly, either the cosmos will be up and I won't have to, or they'll have failed and I'll prepare them nicely for, say, zinnias.

We're running out of time for bare root strawberry plants, but not for plants in pots. And, I can transplant some of the excess from the existing strawberry beds. So I don't think that any strawberries will be going in this time.

And I think that blueberries are going to wait Yet Another Year. In the unlikely event that I have some spare time before the ground dries out, I could till in some peat and sulfur, for next year.

So...hurriedly insert the Jerusalem artichokes, get three beds of potatoes planted properly, and then see what I have time for. That's the plan. Oh, and I've got about thirty-six feet of drills that I think could support one more planting of some light feeder, so I should get seeds of something in there.

I reassure myself with what's already in and growing:

I planted Touchstone golden beets and Oxheart carrots, in the front bed of the currant row. Last time, I planted the carrots ever so carefully--I finely pulverized the soil, pressed a very shallow furrow, mixed a pinch of carrot seed with some compost, sprinkled it into the furrow, firmed it, and watered it veeeeeery gently.

This time I broke up the soil, threw some seed on it, and watered it.

The first time was a success. We'll see how this time goes.

Posted by Martha at 9:19 PM No comments:

So while I'm talking farming, I'll add some factlets.


So if I follow this plan, next year's garden will be heavy on
Oh, and pumpkins. We always grow pumpkins. But they're not food so much as ornamental.  And there will probably be ornamental cutting flowers, too.

There are other things that make me think, "But--but I want 'em!" But looking back at the record, we don't eat much of them. Lettuce and other greens, Armenian cucumbers, tomatoes, sweet corn--lovely things, but aside from the joy of contemplating the corn stalks, are they worth the effort?

Now, we probably don't eat a tenth of the soft fruit, either, but the glee of bending over and snatching a homegrown strawberry whenever I want one is worth it, and I anticipate that the same will be true of the raspberries and the theoretical blueberries. I can't make a similar argument for the currants, but I can't kill them after five(?) years, can I?

I'm mostly typing this here because I have a tendency to lose my garden notes.

So, several weeks ago I planted some Oregon Giant Sugar Pod ("OSU 706", and what does that mean?) peas. I knew it was probably too early, but it seemed worth a try. Three twelve-foot drills, eighteen inches apart. Four to five seeds per foot, so 4.5 X 36 is about 160 seeds. I also covered the area with that spun row cover stuff. I uncovered it this week expecting to confirm my suspicion that I had a complete crop failure, and found that six of those seeds had come up.

At first, that seemed like a possibly interesting breeding selection opportunity--six seeds out of 160 is 1/27, so maybe those six seeds were genetically special--more able to sprout in early spring cold and damp. And the earlier a seed will sprout the better, if I'm trying to dryfarm--I want the plants to get a nice start while the ground is spring-wet.

So I marked "early" on six little popsicle sticks and put each stick a couple of inches to the right of a plant, hopefully far enough that I didn't disturb its roots in any significant way. That would allow me to distinguish those plants from the ones that will hopefully come up after today's replanting, and save seeds from them.

Then I realized that five out of the six winners were on the "uphill" drill--the three drills sloped downhill juuust a little bit. And all the poking around for replanting made it clear that that uphill drill also had more compost--it was substantially lighter and better-drained than the other two drills. The sixth plant was in a slightly raised part of the middle drill. So those seeds weren't competing with all 160, but just with their peers in conditions of better drainage.

But I left the popsicle sticks there, and I'm tentatively still planning to save some seeds. That means that I need to save seeds from some of the other plants, if I want to stage a trial next year.

I'm also debating whether I should save seed from the sixth, middle-drill, plant, giving me three separate populations of seed. No reason why not, really.

Anyway. That is all.
Posted by Martha at 7:25 PM No comments:

Posted by Martha at 4:28 PM No comments: 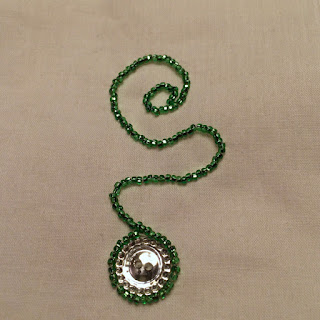 I really should use a camera with better macro capabilities. (Do I mean macro? I think I mean macro.) 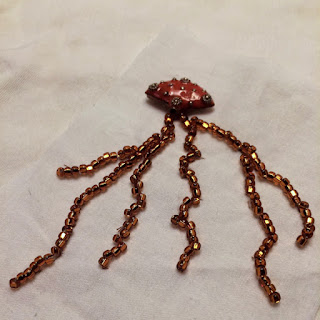 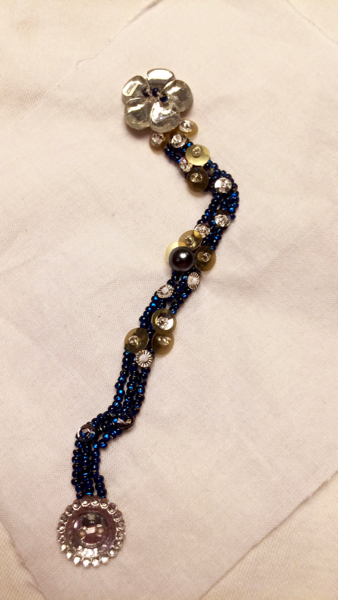 What's with the doodles? 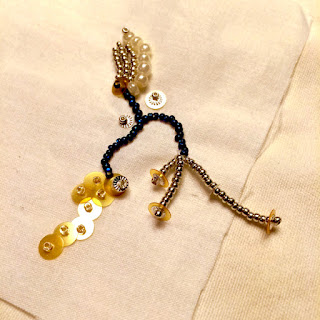 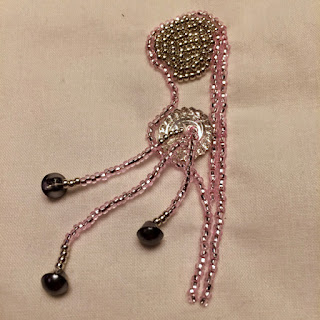 Yeah, it's a little strange.

Posted by Martha at 9:56 PM No comments:

We ate at Fusspot Chicken last night, for the first time. They're a once-a-month Portland, Oregon fried chicken popup. It's some of the very best fried chicken I've ever paid for--only misty distant memories like The Green Parrot compete with it.

In any case, you want to eat it. Really. Just sign up for next month. Pre-order for April 1 opens tomorrow morning. Yum. Hurry up.

Returning to add: You may say "Korean-style fried chicken? What's that like? I want regular fried chicken." My fried chicken "school" is Tennessee pan-fried, and if you don't use the sauce, this will fulfill that craving just fine. On the bone with astoundingly crisp skin, and it's handed to you without sauce; you add it yourself.

Posted by Martha at 9:17 PM No comments:

I learned a beading backstitch from a web site that I can no longer find. I discovered that it has a nice meditative feel, and I enjoy all the shiny beads.

I started with fishes. I post my fishy creations. Just because.

That is all. (Except for the photos.) 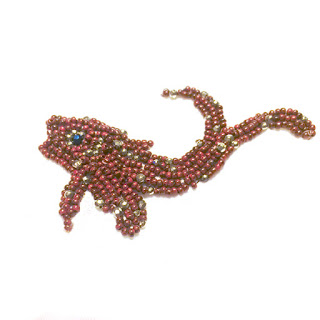 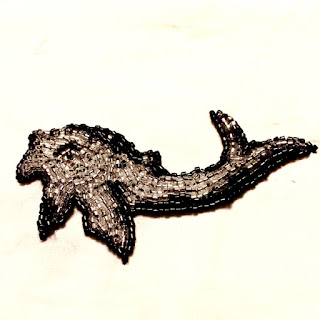 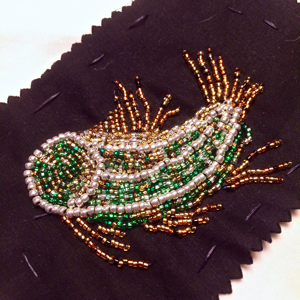 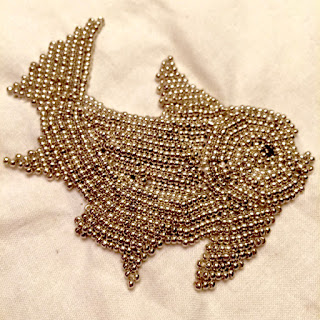 Rambling: Tubers. Or, Feed a Cold!

And possibly the day before.

I'm on the third solid week of the cold, and until I'm better, I'm going to eat potatoes whenever I want them.

We just saw a nice British gardening show with Jerusalem artichokes. Those things in the picture. The gardener referred to them as a "slacker vegetable"--meaning that they're a vegetable for slackers. I've added them to the list of things to consider growing next year.

I'm also debating trying potatoes again. Growing, that is. I have a scheme for using the weed barrier to keep me from having to weed them--starting out folded, so that I can fold it back, hill up, and then put it back in place.

I ordered vintage sequins from Etsy.

I don't know why.

I await them eagerly.

Image: By Pea Chesh. Wikimedia Commons.
Posted by Martha at 10:30 PM No comments: