So, I noticed that the really long knit skirts were so long that they were hanging up on the top of my short boots. I was considering taking off four inches next time. I had a length of black woollyish knit that I thought was a bit short for the full-length pattern. So I made a shorter copy in black. Turns out that I would have had enough fabric, but, so be it.

I also timed the sewing. From picking up the prewashed fabric off the shelf, to putting the last stitch in the skirt, was two hours and twenty minutes. McCall's 6654 is a really simple skirt to make.

I realized that my "replace jeans" scheme should include something to wear when I've been too lazy to press shirts--because woven home-sewn shirts almost always need pressing. So I'm adding a black tee as a part of the scheme.

And this wipes out the difference between the more and less ambitious versions, leaving me with (boldface items are complete):


I may have the green skirt done as soon as tonight. The jackets will be relatively easy, assuming I continue with the comfortably rumply theme of the indigo jacket. Then, for the shirts, I'll need to fit a new pattern, and progress will sloooooow.

Posted by Martha at 5:22 PM No comments:

I finished another copy (copy? what do you call another rendition of basically the same thing?) of the knit skirt, in a nicer knit. It's dark gray; the previous one, which I'm wearing again, is light gray. I'm new to sewing knits, and realized (after the hem of the first one "popped" when I got into the car) that I needed a stretchier stitch. I used the "lightning" stitch on my Viking Rose, which I think is a stretch stitch, though I'm not quite positive because I couldn't immediately find the manual. I'll use the same stitch to re-do the hem on the first one.

Next I'll make a dark-green skirt. Then a black skirt. That will more than fill the "skirts" requirement for my SWAP.

Have I blogged any detail for my SWAP? (SWAP: Sewing With A Plan, an 11-piece sewing challenge managed at Artisan's Square.)  I'm calling it the Maybe I'll Do It This Time SWAP, because I keep planning SWAPs and never finish them. The theme here is to have clothes that replace jeans.

I have two variants, one more ambitious and one less, both listed below. The ones in bold are done. I'll probably re-post statuses and fabric choices.

And now the less ambitious, again with the completed items in bold.
Neither of them are very exciting. I have vague ambition of adding a little excitement to the remaining jackets. We'll see.

Posted by Martha at 8:56 PM No comments:

I finished another thing! McCall's 6654, view E--a long columnar knit skirt. I used a very cheap and disturbingly off-grain knit, so I assumed that I was just creating a muslin to check the fit. But it actually hangs and looks just fine--a nice plain greyish skirt.

I'm wearing it right now as I lounge on the couch. That's what I made it for--I want to wear skirts instead of jeans, but I want the skirts to be just as comfortable as the jeans. This one, so far, seems to work.

But it's not really interesting enough to photograph. So I won't. 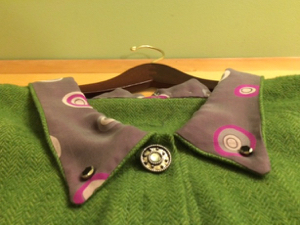 Willow: How come you didn't tell me I look like a crazy birthday cake in this shirt?
Buffy: I thought that was the point.

I finished a jacket! Ha! And looking like a crazy birthday cake is absolutely the point.

The body is fuzzy green cotton, while the collar and cuffs are silk chiffon in a pattern of white and purple circles on grey, with purple silk layered under it to add body to the chiffon and add more purple to the silk. Then there are shiny German glass buttons, plus one big throat button. For glitter. 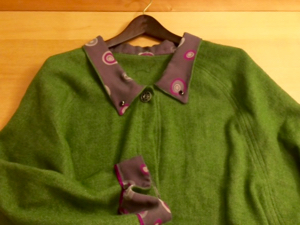 So, "daily" lasted one day. I'll just declare Christmas as a holiday.

Today is the starting day for the Stitcher's Guild 2017 SWAP--that thing where you create 11 garments in...er...a few months. I should be starting, but I'm typing here, in between looking at vintage jewelry on Etsy.

I've been putting all sorts of things in various Favorites lists, and I'm discovering that I have slightly disturbing taste. A large percentage of the brooches that I've Favorited look like something that could come to life and attack.

And all that glitter craving is leaking into my sewing plans. I'm looking for excuses to add beads and shiny buttons, but puzzling over how to deal with laundering the theoretical garments.

OK, I really really should try to sew now. 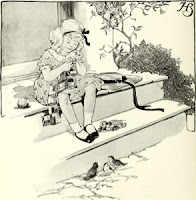 I'm on vacation. (Woohoo!) And I'd like to ease back into a writing habit, at least a bloggy writing habit. So, write. Tappitytap.

Have I mentioned that I apparently type at 110 words per minute? I took one of those online tests, and I don't offhand see a reason for them to boost my ego by lying about my typing speed. And that's actually after a lot of backspace-correction, so I'd guess that my flying fingers are actually typing at something closer to, oh, 130 or more.

Below, I realize that there are a lot of producty things. So, I'll just say here that no, they didn't pay me.

I've discovered that Etsy has a lot of vintage rhinestone jewelry. A whole lot. And a much better interface than eBay. This is a very dangerous fact to learn. Especially since while I'm looking at the rhinestone stuff, I see other stuff.

I'm planning to sew over vacation, too. My goal is to find the clothes that I will actually wear instead of jeans. Random thoughts (writey write write) include:

Next would be a woven cardigan outer layer. And as part of a theoretical travel wardrobe that I'll probably post about soon, I'd like a knit tee, though I debate whether that's worth developing as a pattern versus just buying it. But the above three are more than enough for several days of sewing.

My main concern with all of the above is the likely shapelessness--there's nothing to give me even a hint of an inner curve at the waist. But I keep reminding myself that the goal here is to stop wearing jeans, and even a shapeless skirt outfit will be more flattering to me than jeans.

So. That is all. I might go trace patterns now.

Image: Wikimedia Commons.
Posted by Martha at 4:19 PM No comments:

Goodness. I thought I'd be posting within minutes of that last administrivia post. But not so much.

I haven't yet figured out what causes the spurts of regular posting and the intervening lulls. This appears to be a lull. But I thought I'd type, just to see what happens.

I'm watching Bob's Burgers. It's become one of my very favorite TV shows. Which is impressive, since I don't like cartoons. Louise is my favorite. Right now she's trying to persuade Teddy to let her "inspect" his blow torch.

"All right, this is going to be fun. We have a babysitter and a lot of alcohol."

Yes, that's Bob on a later episode of Bob's Burgers. They're on the wine train. The steward just severely displeased Louise and kept her from the chocolate. He's gonna pay. Don't thwart Louise. She's rather like Helena that way. From Orphan Black. You know.

Here's another Louise link. For your entertainment.

OK, that appears to be all.
Posted by Martha at 1:11 AM No comments: