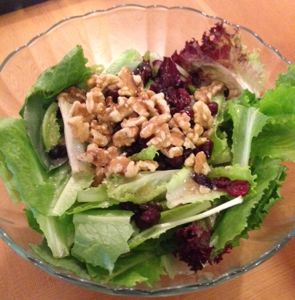 I don't know what kind of salad it is, I'm eating a salad, okay? I'm doing it, do I have to know the names? There's no difference between them, it's a bowl of weeds. Some of them have cheese. This isn't the kind with cheese. Does that answer your question?
Toby Ziegler, West Wing

The garden is producing food! Hah!

No, it didn't produce those walnuts. Or the cranberry raisinesque things. But the greens, yep yep. And there's a wad of kale in the fridge waiting for me to remove all of its health benefits by cooking it with butter and onions. Mmmm.

Planted, that is. Another ninety-six onions, for a total of...er...240 onions in the ground. And the heap of seedlings waiting to be planted doesn't look appreciably smaller. I need to remember next year that Territorial is crazy generous in the number of onion plants per bundle.  The remainder are likely to end up being trashed.

I should say "being composted" but we didn't include a compost heap in the farm.  (For any new readers, "the farm" is a roughly 70 foot by 70 foot vegetable garden. We're used to much smaller gardens, hence the grand name.) I was going to have a "compost row," a row on which I dump all the clippings and thinnings and weeds, in a thin layer over the whole row. I read about this somewhere.  But then I put fabric over everything.

Well, almost everything. Which was the other accomplishment of the day--covering most of the last major areas waiting to be covered. At least, the areas ready to be covered.The blueberry row is still waiting to be amended with sulfur in a perhaps futile hope of making it sufficiently acid by next year, before I cover it.  (Oh. I guess I could make that the compost row?) The pumpkin row wants to be amended with manure before I plant the pumpkin seeds for this year.  The rectangle where the previous blueberries died needs to be cleared.

Himself is proceeding on the irrigation system--a central PVC spine with twelve outlets for the twelve four-foot-wide rows, each with a manual valve so that we can decide whether that row gets watered or not. This year, three rows will be "wet"--they'll get regular irrigation, though we're still going with wide plant spacing and planning to water infrequently and deeply with drippers. Six will be dryfarmed, though I'm going to cheat and irrigate two honeyberry bushes in the front two blocks of one, if I can get the honeyberry bushes now and can't find reassurance that I can get them in the fall.

The remaining three rows will get their permanent plants in the fall, when the rainy season starts, though two will probably be used for further dryfarming experiments meanwhile. The third is that blueberry row, which will mostly just sit around mellowing, then get blueberry bushes in late winter or early spring. I suppose I could grow some sort of acid-tolerant crop there meanwhile.

Why all this detail? I have no idea. Apparently I just want to garden ramble again.

I currently have six edible crops planted (snap peas, lettuce, kale, currants, strawberries, and onions) and no ornamentals. (In the farm. There are still flowers at the house.) Well, except for some tulips popping up in the future pumpkin row. I sort of wish that I'd put in some sweet peas, but I suspect it's too late now.  I'll have to wait for the zinnias that I'm tentatively going to plant in the flower row. And, oh, hey, I could plant a block of nasturtiums. You can eat those, after all. And I suspect they'll tolerate dryfarming.

I was going to put in roses early this year, but then the year turned freakishly warm, the rains stopped freakishly early, and the moment passed--even if I'm dryfarming roses, they need to go into reasonably moist soil. I would plant them anyway and plan to water for a few weeks, but I heard that the expected water shortage is looking even worse than previously anticipated. So the roses, raspberries, perennial flowers, blueberries, and planned shrubs for the back are all going to wait for fall, settle in in the winter rains, and adjust slowly to limited water next year. The perennial herbs will be planted soon; they'll have to take their chances.

I want to eat something out of the garden, as proof that I'll eat from the garden. There's enough lettuce for a dozen big salads; we could eat some of that tomorrow, along with some little kale leaves and maybe some fava leaves, because i just looked up whether I can eat fava leaves and, yay! websites say I can.

My automatic spellchecker is absolutely positive that I mean to say "lava."

I mentioned at the top of this post that I should remember Territorial's generosity, but in addition, I should remember to grow my own onion seedlings. I find it oddly fascinating to have grown my own lettuce and kale seedlings--for some reason, I've always bought those as plants. I think that I thought it was hard to get lettuce to sprout--maybe because of all that fuss about how the seed needs light.

However, all that eagerly sprouting lettuce was a bit problematic to transplant, and the transplanted lettuce is still at seedling size, presumably due to the need to recover from the shock,  while the originals back in the seedbed are big enough to eat. I suspect that I'm going to want to leave one block of open ground in a 'wet' row to not only seed, but grow out, my lettuce. That means that I'll have to (shudder) weed. Oh, well. Eventually I'll want to grow potatoes and carrots, and I suspect they'll need open ground, too.

I ordered a packet of purple sprouting broccoli seeds. This is a form of broccoli that you plant in warm weather--different sources suggest times varying between May and September--and then leave growing, in fits and starts, all winter. In spring it's supposed to grow enthusiastically and put out a lot of broccoli-esque sprouts, which you cut and eat over a reasonably long harvest period. The winter Territorial catalog had several kinds of sprouting broccoli, but now they're all sold out, which confuses me, because you don't plant them in winter. But so be it; I ordered my purple sprouting broccoli seed elsewhere, and have moderate hope that it will work.

That seems to be all. I'll let you know how the lava leaves taste.
Posted by Martha at 12:34 AM 3 comments: