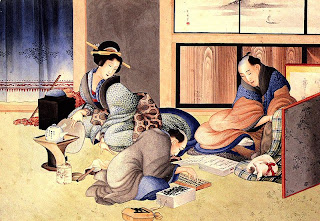 Today I wore Parfumerie Generale Iris Oriental. Lovely, incense-dusty, starts out dry and dries down toward sweet. I'm considering a bottle. But how often would I wear it?

That makes me consider, how often do I wear anything? I've been logging almost every perfume-consuming day since I started this blog in October. I realized today that, hey! my tag counts give me an approximate idea of how much I've worn each fragrance. ("Approximate", because sometimes I tag a post based on a mention of a fragrance, rather than a wearing.)

So what have I been wearing? The top ten are:

The most wearings for any scent, in the ten months since I started the blog, is eleven. That suggests that I shouldn't own more than a decant of anything. Let's just ignore that fact and move on quickly.
Parfumerie Generale is heavily represented - that's no surprise. I wouldn't have expected Un Lys to lead the pack, but it is an all-season fragrance, while Cristalle and Sushi Imperiale are seasonal. No. 19, my favorite, was several positions down from the top, but that's logical - I'm very protective of its scent associations, and generally save it for special occasions.

Issey Miyake A Scent is an unexpected entry in the top ten - I would have said that I mildly like this scent and only bought it to support the "green" trend. But it appears that I'm quite fond of it.

Cuir de Russie is the only fragrance in the top ten that I don't own in a full bottle. I shy away from the huge Thermos-sized bottle, but maybe I should break down and buy myself a one-ounce decant, and find a pretty old-fashioned atomizer to put it in. Or maybe I should just buy the Thermos and run around town forcing half-ounces on everyone who's ever expressed an interest in perfume. (Postal Regulation Phobia bites me again; without that, I could do a bottle split and keep the bottle.)

What aren't I wearing? What "investment" scents could have been skipped? Well, when I want incense, Paestum Rose can't compete with Serge Noire.  Cuir Venenum loses to Daim Blond or, when I want something less sweet, Cuir de Russie. Original Vetiver loses the battle with Vetiver Tonka. Cedre Sandaraque fails to beat the simpler Art of Shaving Sandalwood.

I remember loving Cuir Venenum and Cedre Sandaraque, so I'm going to resolve to wear them more often, until they find their niche. Paestum Rose and Original Vetiver, on the other hand, may be bottles that I'm ready to let go. If I could do so without mailing them, that is.

I still want that bottle of Iris Oriental. But the numbers have me persuaded that that would be Wrong. We'll see how long this sensible phase lasts.