SOTD: Scentless Saturday and More Things To Do! 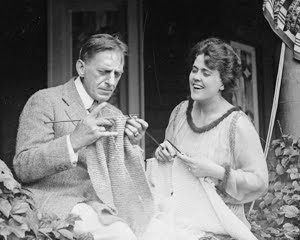 I have hobbies. There are the three blogs, two of which I neglect shamefully. And another blog that I'm supposed to be helping with. And the garden, where I mostly admire the efforts of Gardener Artist (Miss Mosaic). And I'm trying to read 100+ books by the end of the year. And there's the chicken frying. And the decluttering. And the unprecedented idea of exercise, on the tricycle. And the park sitting.  And we're watching all of Babylon 5 again, with friends. And I haven't taken the time to cook or sew or do anything with that box of beads that's around here somewhere, in a long time.

So I need another hobby, right? Of course I do!

Felted knitting it is. I've always liked the idea of knitting, but I only really like the masterpieces, the things that I might be able to create after, oh, thirty years at the hobby. I do like baby hats, but I don't know that many babies, plus I'd probably spend months reading up on Infant Hat Safety Guidelines before I dared to actually relinquish a hat to anyone with supervisory responsibilities over a baby.

So I tend to stop my projects before they're actually finished, after they demonstrate their first flaws. The fuzzy angora scarf with wide bands of several different colors is about ten years old and four feet long, but still not done. And Himself is still waiting for his sweater.

But I like felted wool things, both the difficult-looking things like hats, and the oddities like little felted balls. And I'm told that the felting process (heat, water, agitation, intended to produce what you produce accidentally when you throw a wool sweater into a washer on Hot) conceals many flaws. I knit many flaws, so this is good.

So I'm knitting (well, not while simultaneously typing; that would be impressive) my fifteenth row of a round of wool that is intended to be felted into an ittybitty gift bag, once I get another twenty-five or so rows on it and sew up the bottom. And felt it and block it and dry it and edge it and possibly also line it with some kind of gaudy silk, and add a cord. And then I'll...

OK, I don't actually know what I'll do with it; it was just the simplest project in the felted knitting book. Maybe I can use it to keep a perfume bottle feeling cuddled and secure. My eventual goal is to master felted knitted hats, but I'll probably work my way through glasses cases and potholders and tea cozies first. And inflict them on people.