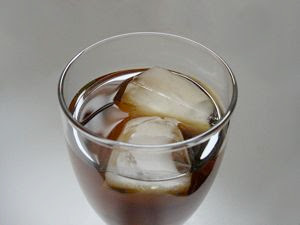 This is a tea fragrance, but it's not redundant with any other tea fragrance that I've tried. It's much darker than the bright, sugary American South iced tea of ElizabethW Sweet Tea. It's missing the floral and green tea notes of L'Artisan Parfumeur's The Pour Un Ete, replacing them with darker, stronger black tea. It's far less friendly than the warm, affable, winter-spices scent of L'Artisan Parfumeur's Tea for Two, and more bitter than the bright sunshine of L'Occitane's Bergamot Tea. It doesn't have the pleasant herbal meadow notes of Lorenzo Villoresi Yerbamate or the soft, creamy florals of Hermessence Osmanthe Yunnan. It does have a very close relationship, to my nose, with Parfumerie Generale Harmatan Noir, which I've already discussed in embarrassingly rhapsodic detail.

It's not particularly eager to please, and I seem to fall for that kind of fragrance. It has an uncompromising, medicinal-but-all-the-same-pleasant edge that reminds me of... OK, I was going to say thyme, but I went to LuckyScent to read the list of notes, and I see sage. Yes that's what I'm smelling.

My limited expertise in teasing out notes is no match for the rest of this one. There's tea, of course. And a tangy note that takes the role of citrus with tea, but isn't citrus - maybe it's the bergamot, mixing with the sage. "Burnt woods" is listed, and I do indeed get a charred note - not sweet woodsmoke, but bitter burned carbon. It claims to include white flowers, but I don't get the faintest trace of this note - to me, it's entirely non-floral.

It's one of my few season-independent fragrances - in the winter I rarely want a "refreshing" fragrance, but this is an exception. This is a solid favorite, one that I would wear quite frequently if I weren't constantly sampling.

Oh! Review Roundup! This is reviewed at Perfume-Smellin' Things and Now Smell This and IndiePerfumes.

There's also, by the way, a related fragrance called Hyperessence Matale that's said to tweak the proportions a bit, away from tea and toward the flowers, bergamot, pepper, and so on. I intend to smell it one of these days, but I don't really want less tea, so I'm not waving my arms too frantically to get my hands on it.

Photo: By Editor At Large. Details and license at Wikimedia Commons. Click for details.
Posted by Martha at 7:30 PM