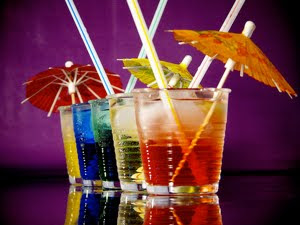 The idleness started today. Saturday was party prep. And Sunday was party. (Fried chicken was involved. Of course.) So today is the first day of serious idleness. Park. Books. Dinner. Cocktail. And now I blog, in a rambling manner perhaps slightly influenced by said cocktail. (Lemon drop. Mmmmmm.)

I spent the day largely unscented, except for the above-mentioned Jo Malone White Jasmine & Mint Bath Oil. I'm tragically out of ElizabethW Rose, and I decided that I really ought to use up some of my backlog of bath potions before ordering any more.

It's an odd scent - as a perfume, it smells like, well, jasmine and mint, with maybe a faint trace of soapy sparkle. But in bath water, it smells like soap. Specifically, like really nice laundry detergent, the kind that you imagine when watching people blissfully bury their faces in snowy white towels in television commercials for detergents, rather than the dreadful white musk that the laundry detergent usually really smells like. I like it, but I'm puzzled about the drastic difference.

And now the laziness will resume.