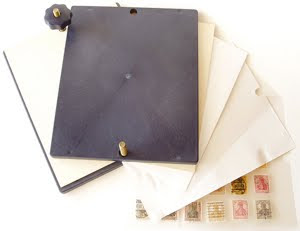 I used to collect stamps. Off and on. And it's the "off and on" that interests me today. Though I warn you in advance that my thoughts below don't come to a conclusion.

Sometimes, for months at a time, stamps were the most fascinating thing imaginable. I dug through Scott's guide, and got stamp magazines, and debated who to order approvals from, and read Nassau Street and Stamp Collecting For Fun And Profit again, and tried to create what I thought of as "real" album pages, with typed or carefully lettered information about each stamp. And I'd buy cheap stamp mixtures from Woolworth's, and ever so carefully soak all the stamps off and dry them nice and flat and poke them into my stock book with stamp tongs, and reorganize and reorganize and reorganize them again.

And then, one day, suddenly, stamps would become incredibly boring. Little pieces of paper that people once used to send letters? Who could care about that? And I'd put all the stamp collecting stuff away. Then, a few months or a year later, the cycle would turn and stamps would be fascinating again.

Sometimes the stamps would give way to other hobbies, but more often, all of my interests would wax and wane at the same time. I'd either be bouncing delightedly from shiny thing to shiny thing, or I'd be sitting back watching the world go by. This sounds rather like depression cycles, but during those sitting back times I don't think that I was sad, I just didn't see any particular need to rush out and find things to change. I read books and watched television and ate food, and that was good enough. It wasn't as nice as the shiny things, but it was fine.

Right now, I seem to be in a waxing hobby cycle. I just took up knitting. As mentioned in The Other Blog, I'm threatening, as of today, to take up sewing again. I'm wandering through LuckyScent wanting to buy every perfume I see. I'm making plans to learn to make the perfect shrimp salad, of all things, with the shrimp properly cooked with their shells on, and homemade mayonnaise. I keep having vague thoughts of taking up wintersowing and propogating weird and rare seeds.

What I want to know is, what inspires the hobby cycles? What inspired this one? I know that I started this blog last October out of a vague feeling that I'd been staring at the world too long, and that it was time to get up and find something shiny to chase. I don't know if that creative effort sparked all the others, or if it was the beginning of a cycle that was on its way.

What about you folks? Does your creativity also cycle between idleness and frenzied activity?

Image: By NobbiP. Wikimedia Commons.
Posted by Martha at 8:58 PM