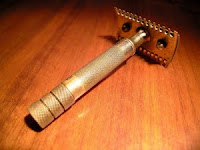 Today's scent is by a company with the unlikely name of Art of Shaving. I say unlikely, because I'm a woman. This is the second day in a row that I've worn a fragrance that's made and marketed for men - yesterday's Original Vetiver is also "officially" a man's fragrance.

I tend to prefer unisex or men's scents to scents marketed only to women, though as I increasingly discover old-fashioned femme-fatale scents, the gap is shrinking. I think that this is explained by my dislike for certain notes - high-pitched florals, strong aldehydes, syrupy fruit - that tend to dominate women's fragrances these days. Aside from the aldehydes, these notes weren't so dominant a few decades ago.

I suspect that any number of classic women's fragrances, up to and including Chanel No. 5, could be successfully marketed to men if they were released as new fragrances today. And, similarly, any number of men's fragrances could be marketed to women. If Sandalwood were released by, say, L'Artisan Parfumeur instead of Art of Shaving (isn't it about time that their Exceptional Harvests line focused on something other than flowers?) I'm sure that plenty of women would be wearing it.

But Art of Shaving it is, so I suspect that I'm one of very few women who've gone so far as to buy the full bottle. And I love it. Some people find the eucalyptus or evergreen notes to be dominant; I don't, or perhaps I don't have enough sandalwood experience to be sure. It is just a bit medicinal, but I like that in a fragrance. To me, it's mostly plain sandalwood, comforting but just aggressive enough to keep it from being sleepy. I always plan to layer it with something, but once I spray it on, I find it satisfying enough on its own.

Review Roundup: Basenotes and Badger & Blade (that's a new one in this blog, isn't it?).