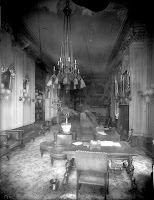 Chergui is popular in the niche world. (Though there is a contrary feel about combining "popular" and "niche", isn't there?) Very popular. People speak of it with the same fondness that they have for Tea for Two, with an added measure of swooning.

I'm, um, not quite sure if it pleases me.

At first spray, Chergui is almost alarmingly thick and sweet, as if it's draping your brain in a coat of syrup. Tobacco-infused syrup. With honey. A hearty sniff at this stage can make me a little dizzy.

While the name refers to a hot desert wind, to me Chergui smells more like a British gentleman's club in a world where tobacco never gets stale. Sweet tobacco, leather, spices, honey - well, I'm not sure what the gentlemen are doing with all that honey, but it's in there. Maybe they eat scones while they smoke their pipes.

Serge Lutens fragrances often undergo a complete metamorphosis between the top and heart notes. Serge Noire, for example, starts out as a drenching of viscous camphor, and dries to sheer black-dust magic. While the change is not as dramatic, Chergui, too, turns a little dusty and a lot less impenetrable as it dries. I can imagine the honey turning crystalline, letting the air through.

I like Chergui better the longer it develops, but I'm always in a hurry for the changes. I'm happy to wait the two or three hours that it takes for Serge Noire to reach its prime; I just need the same patience for Chergui.