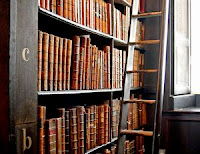 In case you're not familiar with it: NaNoWriMo is National Novel Writing Month. Participants in NaNoWriMo try to write a fifty thousand word novel in the month of November.

Now, the operative word there is write. As in pounding out words and sentences. Editing, and a plot that makes sense, and little niceties like making sure that your main character has the same hair color, accent, or name in Chapter Seven that he had in Chapter Two, all wait until after November. The idea, as I understand it, is just to write, so fast that the internal editor simply can't keep up and collapses, gasping for air, somewhere before the second chapter.

Creating fiction is not altogether new to me, but in the past I've created it through roleplaying - writing, running, and participating in adventures in various roleplaying games. Actually writing fiction - being in charge of the entire world and all the characters all on my own, and describing them in a permanent form - is definitely new. It's rather exciting to own the whole world rather than, as in roleplaying, making big plans only to revamp everything when the players turn left instead of right. On the other hand, that unpredictability often made for the best fiction, so will anything interesting really come out of a situation where I can have it all my own way?

We'll see, as this continues. As I reach the twenty percent mark, I'm surprised to find that I'm already, well, surprised at the results.  I didn't start this under any illusion that I'd come out with a publishable novel, and that expectation is not being challenged - I doubt that I'll be making use of even one word of my novel after November.

But I also didn't think that anything about my writing or creative process would change, and it already has. For example, I've never been able to create a male character that seemed three-dimensional, and I already have one that I'm pretty pleased with. And I've already changed the way that I write dialog (that is, the way I convert the movie in my head to words on the computer screen) in only a few hundred words. I'm learning things.