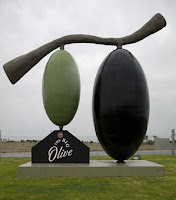 For the first hour or two, Rose Kashmirie reminds me of candied orange peel. I don't mean that it actually smells like citrus. But like sugared citrus peel, it has a strong bitterness paired with, but not really tempered by, an equally strong sweetness. And I don't like bitterness; its presence usually distracts me from all other notes. I keep trying to like bitter roses--Paestum Rose, Une Rose, No. 88, Dark Rose, Incense Rose, the list just keeps going. I like the idea of a sweet flower made darker and deeper and more interesting by contrasting notes, but I just can't stomach the bitterness. Gasoline? Yes. Mothballs? Great. A little touch of bitter? Eeeeew!
As it turns out, Rose Kashmirie sweetens over time. After an hour or two, it becomes a very warm female scent; it feels like furs and velvet and quirky old-fashioned hats. Around the sixth hour it's almost all sweetness, mellow and powdery and deep, a perfect comfort scent without the sticky-foody aspect that dominates so many comfort scents. I love this final drydown so much that I'm tempted to buy the perfume just to have access to it.
When I read other reviews of Rose Kashmirie, I don't see much made of the bitterness--it's acknowledged, but no one seems to get, or at least be bothered by, the teeth-on-edge feeling that I get. It's rather like my reaction to red wine; for me, all the sweet or raisiny or other flavors are drowned by a gritty bitterness that most people either don't perceive or actually enjoy.
I've read more than once that small children are picky eaters not because they're unsophisticated little monsters who want nothing but sugar and have spent too much time at Krispy Kreme, but because they can taste sharper flavors much more strongly than adults. Perhaps as a survival characteristic--many poisonous things that a toddler might stuff in her mouth have those unpleasant tastes--small children are wired to reject bitterness. Over time, those extra bitter receptors go away.
In fact, over enough time all of our taste buds go away, one by one, until when you're very old almost the only thing you can taste is sweetness. My father, late in his life, was often only willing to eat meat when it was accompanied with cranberry sauce, and he couldn't understand why he no longer liked green beans. I proposed the sweetness theory to him, and he largely rejected it, while at the same time being quite pleased with sugar-glazed carrots. I suppose old habits are hard to break, and I rather wish that I had broken them for him and made him some sugar-glazed green beans to try. Sugar and soy and garlic might have made them perfectly palatable to everyone at the table. I'll need to remember all of this for when I'm older.
There's also the phenomenon of the "supertaster", a person who even in adulthood has an enhanced response to certain tastes, including bitterness. My taste preferences seem to run along the supertaster scale, and I'm using that as an excuse for why I was a terribly picky eater as a child. I also blame the cuisine of the parts of the southern Midwest where I grew up - vegetables in those areas were very thoroughly cooked, or canned and then again very thoroughly cooked. In the water from the can. And then they were served in the water from the can. Salad, too, was often served in a pool of water that diluted the Wishbone dressing. I'm not sure why all produce had to be accompanied by dampness.
I remember my amazement when I ate a package of Green Giant Boil In Bag Chicken A La King (and I find myself wondering why we had one--it was surely pretty expensive for Mom's frugal habits) and ate a pea that was still colored green. Bright green, not gray-green. And sweet. Peas have sugar; who knew? I realize that many people can taste the sweetness of canned peas; my father used to love the tiny Le Sueur ones. I've never gotten any flavor but "can" out of canned vegetables; maybe it's another supertaster thing.
So my introduction to "fresh" vegetables came from frozen food; that seems vaguely sad. It's not that Mom was a bad cook, but her talents lay in thoroughly cooked meat dishes--spaghetti sauce, fried chicken, pot roast. Himself goes into rapture over restaurant pot roast that makes me say, "Yeah? Tastes like Mom's." Sadly, Mom doesn't remember how she used to make the pot roast, because she doesn't make it for herself; I'm going to have to figure out out myself. All she's sure of is that it involved a packet of onion soup mix, and all I'm sure of is that it involved chunks of beef, not a full-size roast.
Er. Where was I going? Acquired tastes, that was it, and bitterness specifically. Red wine is a lost cause for me, and so are bitter salad greens. I'm fond of olives, though I prefer the butterier, blander ones. I like my chocolate with extra cocoa but also extra sugar to counter it. The puzzlement is why that preference, which is surely about tastebuds, should extend to smells. I'd like to acquire a taste for bitter perfumes, but along with red wine, it may be a hopeless cause.
Image: By Bilby. Wikimedia Commons.
Posted by Martha at 1:47 AM