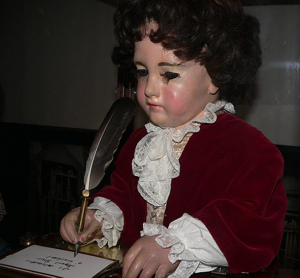 So, new thoughts on NaNoWriMo.

See, I like my plot. It's not just good enough, I actually like it. And the characters. And the several different ways that it could go. And I strongly suspect that it's a concept that won't benefit from the frantic "Hey! That could be a scene with a lot of words!" approach of NaNoWriMo. At least, that's my approach to NaNoWriMo.

Now that I've found the plot that I wanted, I'm seriously considering doing something else. Something that would probably go in the NaNoWriMo Rebel category. I'd still count the 5,573 words I've written so far; that would be part of the rebel thing.

So, something else, like a nonfiction book about clutter and hoarding and, while I'm at it, why all the experts demonstrate a fundamental misunderstanding of compulsive hoarders.

Or, see, I could go on a blogging frenzy and write forty-four-thousand-and-change words of blog posts. Would that just be sheer mad madness? Probably, because fifty thousand words doesn't really allow for, y'know, editing, and I like to edit before I post.

But it does mean that I could count this post. So it'd only be (frantic calculation) 44,159 words to go.