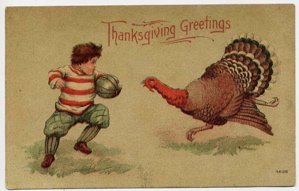 This year we had a heritage turkey from Rogue Valley Brambles. Yum.

We'd heard delicious-sounding things about this turkey. Moister breast meat. More fat, and there's no time when I don't approve of more fat in my meat. Actual turkey flavor. So last year we tried to order one in early fall, and while they didn't precisely laugh at us, we were too late. So this year we got our order in somewhere in midsummer. We drove up with the cooler to pick it up on Monday, Himself started brining it yesterday, and he roasted it today, largely based on the method described in this post on Tigers & Strawberries.

It finished roasting far sooner than we expected--we had put the turkey in, contentedly made and eaten pancakes to tide us over the anticipated turkey-roasting hours, cleared the decks in the kitchen, and were lolling with our computers when I got up for a drink and glanced at the thermometer tethered to the turkey. Our goal temperature for turning the oven off and finishing with residual heat was 140, and the thermometer read 124. Panic!

We went into a frenzy of washing and trimming and boiling and melting and smashing things, which taught us that we will spend exactly as much time cooking a meal as we have available to us. Without the rapidly browning turkey bearing down on us, it would have taken us two or three hours to make the mixed-white-and-yam mashed potatoes and brussels sprouts and the second batch of candied yams. There would have been puttering and debating and examination of multiple cookbooks and much discussion of whether the potatoes were ready to mash. We didn't actually eliminate any of these steps, we just went through them a great deal faster. ("Drain 'em! Drain 'em now!") Everything landed on the table while the turkey was still in its resting-after-cooking prime and was just ready to carve.

Again, yum. Best turkey we ever had. It had so much flavor that Himself has resolved to also start buying chickens from Brambles, to see if they're similarly superior. Sadly, we'll have to wait until May--they don't harvest chickens in the winter. No one took us up on our Thanksgiving invitation; it was sad to not be able to share our turkey, but on the other hand it allowed us to be post-dinner slobs. The first load of dishes are swooshing in the dishwasher, and we're watching classic Thanksgiving television now.