Y'know, I'm starting to wonder if I'm going to end up writing fifty thousand words about NaNoWriMo. OK, not fifty thousand, but, y'know, a lot. It does seem to bring up a lot of thoughts that I find easy to write.

Look at perfume, for example, and all of our perfume blogs. The first discussion of perfume is, of course, about the scent itself. And that can lead to discussions of scent in general, and how scent is an aid to memory, and how scent seems to have a direct link to our emotions. And it seems that quite often, perfume lovers are also pretty strongly attached to food and flavors, which makes sense, since most of flavor is about scent.

Of course, that could lead to a discussion of the official four tastes -- sweet, sour, bitter, salty.  And that can lead to the controversy over the fifth taste, umami, the taste of savory/meaty flavors, and whether that taste actually exists. Umami has, I think, been recognized for a long time in Japan (and perhaps in other areas; I'm just aware of Japan because it's a Japanese word), and that can lead to a discussion of the points where absolute "it's a fact!" beliefs vary between cultures.

And that makes me think of Luca Turin and his theory of scent, and the scientific community's general attitude of "ppft" toward that theory, an attitude that seems to me to be distinctly unjustified. And that makes me think of other areas where the scientific community was recalcitrant about new ideas, like the bacterial cause for ulcers. Didn't someone actually deliberately infect himself with the bacteria in order to give himself an ulcer and prove his point, or is that a scientific urban legend? And even if they didn't, it reminds me of my psychology professor, who spoke admiringly of the man who injected himself with curare so that he couldn't move or even breathe, to prove that the behaviorists were wrong and that thought could exist without behavior.

And that reminds me of a story about Temple Grandin in A User's Guide to the Brain. As I recall it, in spite of the absolute assertion that certain mental circuits must be developed in childhood and that therefore certain skills absolutely cannot be learned in adulthood, she trained herself to deal with "personal space" by approaching supermarket automatic doors.

This is beginning to feel like the Kevin Bacon game - how many levels away from the original subject (perfume, in this case) are allowed before I can no longer claim that the topic is inspired by that original subject? 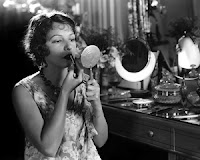 Ambling back to perfume, there is of course a huge branch that I've so far ignored, the branch that leads to perfume as a beauty product, and that leads to beauty and self-image and self-expression. And makeup -- a branch that I can't follow very far because I haven worn makeup since, roughly, age sixteen. The makeup discussion branch does lead me to my mother, as many things do. And to my mother's insistence on wearing the very same bright red lipstick day after day, the same lipstick that she's worn since at least a decade before I was born. And that makes me think of Max in 2 Broke Girls, who also wears rather retro-feeling bright red lipstick, and looks magnificent in it, and that makes me wonder if my mother, when she was Max's age, looked similarly magnificent.

And 2 Broke Girls, the rare show that acknowledges the existence of working poverty in the United States, could carry us through an far, far longer conversational path than this post could begin to support, or even outline.

Dropping back to makeup and beauty products, there's the fact that I'm starting to see distinct pillow-face lines in the mirror in the morning, lines that make me consider whether I ought to investigate whether all those skin potions actually make a bit of difference. And, going further, they're evidence that I am indeed aging, and that's another conversational path that can lead to infinity.

Beauty products lead to other self-image and beauty… stuff, like clothes. I've discussed clothes on this blog before, and my on-and-off consideration of the possibility of actually putting some thought and effort into them. I recently re-read An Episode of Sparrows, and I've always loved the bit where Lovejoy sells the new clothes bought for her by the children's home and buys some more to her taste, including "A little box coat like a reefer, not a real reefer, of course, but quite good cloth and good turnings; it was forty-three shillings, but you have to pay quite that." The delight in that description has always made me think that surely there must be more to clothes than I've ever seen before. But aside from silk scarves and the occasional neat little pair of shoes, I'm not seeing it yet.

Oh, and am I counting this post toward my NaNoWriMo word count? Of course I am.