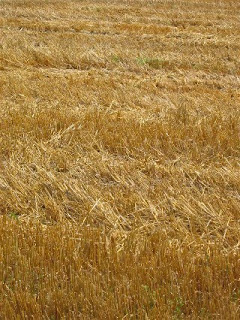 This one's going to need another try. Even on a very light application (I learned from the last perfume oil), it starts with a slight overkill of spice and something heavy and dark. It almost makes me think of curried meat. Or curried wood. Or curried furniture. Very odd.

But several hours later, exactly that same note has mellowed into something much lighter, almost a fresh-air smell. I think that I've learned to recognize the "hay" note - it does remind me very much of Bois Blond, which is also said to have hay.

Photo from Wikimedia Commons
Posted by Martha at 10:49 PM