Hoarding: Souvenirs, Heirlooms, History, and Junk, by way of a handkerchief 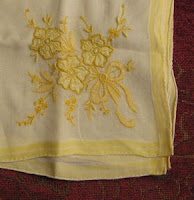 So I just wandered to the coffee shop to get myself some hot chocolate, wearing a little handmade purse that hasn't seen use in some time. When I opened the main pocket of the purse to dump in my change, I found a handkerchief.

It's a pretty handkerchief. It's white lawn with a woven-in yellow border, with a bouquet of what look to me like Japanese anemones (my favorite flower) embroidered and appliqued in yellow. It was my grandmother's - or possibly it was my mother's and I "borrowed" it from her in my youth. I think that it was mass-produced, but at a time when standards for such things were higher than they are now.

It's a very nice thing, but it's also a usable thing, and I'm using it. It's a useful possession, and it's a souvenir, and an heirloom, and a link with the past.

I found myself wondering, is this some small part of what causes hoarding? Do people crave possessions that have some meaning - art, or beauty, or craftsmanship, or history - and, failing to find that meaning, do they assign meaning to things that have none? Is this part of what drives a hoarder that can't throw away a sports cup or a used bandage? Part of what motivates them to buy yet another discounted T-shirt that they won't wear? Part of what makes them unable to throw out the World Almanac from twenty years ago? ("But it's a _book_!")

I don't like the idea of attachment to possessions - that's how hoarding happens in the first place. On the other hand, is it a mistake, some sort of societal illness, that most of every modern person's possessions are essentially worthless, in terms of beauty and craftsmanship and meaning?

When we look at "vintage" items, even the relatively cheap and commonplace ones, they so often seem to have more presence, more beauty, than the average commonplace item today. Of course, there's a selection process here - the more beautiful and durable things were kept and collected, the less so were long ago discarded. But I still persist in seeing a difference.

While I'm trying not to collect, and determined not to collect the useless or unused, I'm increasingly drawn to possessions with a history - a history that already exists, or one that will grow as time goes by. Possessions like handkerchiefs instead of tissues, and preferably interesting or beautiful handkerchiefs. Or hardbound ex-library copies of my favorite books from my childhood instead of new paperback versions, or the vintage desk chair that I use as a lamp table. And that handmade purse, even if it is modern. Someone chose three different tapestry fabrics for it, made the corded trim, and assembled it all. It's art, if only in a small way.

I still can't afford to overvalue it - that is, again, where hoarding lies. If that purse is torn or stained someday, or I stop using it, I need to be able to throw it out or give it away. But all the same, the purse satisfies a craving for meaning that a waist pack, for example, just doesn't.

Today's theory is that we're all more or less starved for that meaning in our possessions, and that hoarders create it where it doesn't exist.