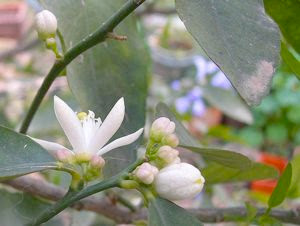 Pulling on my sweater this morning, I got a lovely whiff of cedar from yesterday's Navegar. Rather than fighting it, I decided to continue the cedar theme with Jo Malone Sweet Lime & Cedar.

There's a note in Jo Malone fragrances that I can't identify, but find very satisfying. It's like the olfactory equivalent of being comfortably fed after waiting a little too long to have a meal. That note, whatever it is, gives these otherwise light and fluttery fragrances some weight, something that makes them worth sniffing after one might otherwise get bored with the lighter notes.

As for describing this fragrance, it describes itself pretty well. There's cedar, a somewhat sharper cedar than Navegar, without the slightest hint of floral in it. And a surprisingly long-lasting lime note, so much longer-lasting than your usual citrus note that I wonder if it's something other than lime. (I see from the reviews that it's kaffir lime leaves; maybe that explains it.) There's said to be coconut and other things, but my nose isn't educated enough to find them.

I read that this fragrance is inspired by the flavors of Thai food, and I see that the reviews tend to regard it as a summer cologne. None of that is true for me - I don't perceive it as at all foody or even food-garnishy, I use it as an autumn fragrance, and it's stronger and longer-lasting than a cologne. (In fact, it seems to be getting stronger, not weaker, as I go into the second hour; I'll have to spray on a little less next time.)

But none of that is a criticism; I like this one, and I should wear it more often.

Update: Six hours later, it's still growing! Don't overspray this one, no matter how vanishingly light it seems at the beginning. Really. Don't.

Review Roundup: Now Smell This and Perfume-Smellin' Things and SmellyBlog.