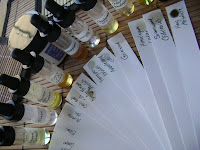 The Perfect Scent is an entertaining read, though perhaps only if you're a perfume freak. It follows the creation of the Jean-Claude Ellena scent Un Jardin Sur Le Nil, and the Sarah Jessica Parker scent Lovely - both well-known perfumes. (The perfumers for Sarah Jessica Parker's scent were Laurent Le Guernec and Clement Gavarry.) The two stories alternate chapters throughout the book.

In the process, the book tells us a great deal about the perfume industry - and two different ends of the industry, the loftier artistic side and the less-lofty mass market side. Though, really, the two sides don't end up looking that much different. Parker's perfume seems to involve a good deal more artistry than one might expect, and Ellena's perfume is certainly heavily driven by the commercial process.

The general consensus in the World Of Perfume Freaks is that Sarah Jessica Parker is the rare celebrity who's actually interested in perfume, and had some involvement in the creation of the perfume that has her name on it. The book bears that out, and it's enjoyable to read about Ms. Parker (can she really be that charming?) and to also to imagine the idea of world-class perfumers creating a scent to reflect the preferences and personality of a non-perfumer. Reality is unfortunately injected, since the scent that came out of this process was not the edgy, "dirty" scent that Ms. Parker had in mind. But it's fun all the same.

If the first story follows the perfume enthusiast (who happens to also be a multi-million-dollar earning acting star), the second follows the artist. I'm somehow embarrassed to say that this story interests me far less. I was fascinated by the story of SJP Lovely, and also by Chandler Burr's other book, The Emperor Of Scent, which I'll be posting about any day now, and which follows Luca Turin's efforts to create and publish his theory of scent.

I guess this reflects that I am an enthusiast, and a geek (though not a Nobel-prize-contender, quantum-physics-theorizing level of geek, so do I really have much in common with Luca Turin?), but not an artist. Ellena's travels to find inspiration in the landscape, his excitement at smelling a world-class... er... see, I don't even remember the scent material. His excitement at smelling a world-class something or other and his disappointment at realizing that it wasn't right for his perfume, all of those steps in the artistic process - they just don't grab me.

I think that I'm too much of an engineer to really get into the Ellena story, too much of a "very good is good enough" mindset. At best, I'm a craftsman; I'm never going to be an artist.

But the book is, again, a good read, and great material for a perfume freak.

Photo by Ayala Moriel, from Wikipedia Commons. Click for details.
Posted by Martha at 12:02 AM