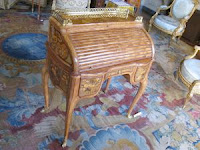 I read a lot. A whole lot. Not always new books, but there's generally at least one book sitting around with a dog-eared page, or actually in my hand.

So I'm adding Book Of The Day to Scent Of The Day. We'll see how this works out.

_Danger Point_ is a murder mystery by Patricia Wentworth, in her Miss Silver series. It's set in England, it's copyrighted 1942, and that appears to be approximately when it's set. Much of the action takes place in the massive family estate of Tanfield Court.

I like Miss Silvers. While she doesn't have the flaws of, say, Agatha Raisin, she's also not a flawless little white-haired bundle of perfection. Or, actually, aside from her taste in decorating and clothes, she is rather perfect, and that's her imperfection. She's clever, she's collected, she's tidy, she's frugal, she rarely says anything stronger than "Dear me!", and at times others are properly irritated by all that.

Patricia Wentworth, in general, wrote Good Reads. Varying characters, interesting if cozy psychology, events that are enjoyable to follow. The core conflict of the plot can generally be summarized in a sentence or two ("sweet heiress marries dubious money-hungry husband" is the summary for this one), but that's OK.

I do have an unfortunate tendency to throw modern psychological jargon at the situations in Patricia Wentworth's books, and to see some of the situations as textbook cases - which is actually rather interesting, considering the age of the books. The wife who's desperate to make her husband smile at her, the daughter who can't pull away from her self-absorbed mother, the hard-working woman who enables (see? jargon!) her slacker brother-in-law, all of them seem startlingly modern, among the tea and crumpets and well-tended gardens.

This particular book is about the desperate wife, and this is at least the third time I've read it. So I think I'd recommend it.