I generally try to write about my SOTD before refreshing my memory as to what others have written. I'm not sure if this is a logical strategy - would it make more sense to be fully informed before I start typing? But would it be as much fun? After all, at this point this is more of a diary than a publication, so fun should be the point. 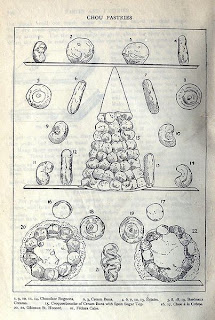 Anyway. I don't know what to say about Aomassai. My thoughts come down to: "Toasted sugar. Yum." And, well, that's all very well, but there's not much to it. So I'm going to read the reviews now.

Except, first... one other thought did come to mind: I realized today that I do wear fragrances, to a limited extent, for other people. Not mostly for other people, but I guess that I do think of them as projecting an image. Because while I think of Cristalle as a sophisticated woman in pressed white linen, and Daim Blond as a Hitchcock blond in furs, and Mandragore as a thirties-movie city girl in a flawless suit and tappity-tap heels, Aomassai is... a pastry.

I'm not quite positive that I want to be a pastry. I'm visualizing myself walking around in a wonderful-smelling, flaky, burnt-sugar-encrusted, artisan-croissant version of one of those giant hot dog costumes. Is that really what I want?

Apparently it's not a deterrent, because I'm sniffing happily and asking myself, "Why haven't I been wearing this all week?" But is the Wearing A Giant Food Suit vibe a positive thing? I suspect that if this were just as foody, but not so very, very delicious, I might have skipped it for something else. Cadjmere, for example, which at least turns me into a grey cat, rather than a Baked Good Item.

But it is that delicious, so I think I'm just going to get used to my pastry identity.

And I'm done talking, so I'll go re-read the reviews now. After rambling, as usual.

Review Roundup: The Non-Blonde and Now Smell This and Perfume-Smellin' Things and Fragrantica and Nathan Branch and PerfumeCritic and Bois de Jasmin.