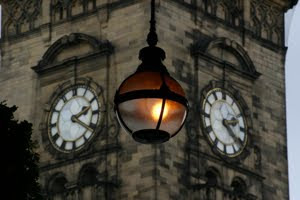 Saturday night, I dressed like a girl - trumpet skirt, an actual blouse, those girly sandals, and a purse in two different patterns of jacquard fabric, one of which actually coordinated with the skirt. (From these guys. I'm pointing to fashion-related sites. Am I unwell?) Saturday afternoon garb more than Saturday night, but still. I'm supposed to be pulling on a black-washed-until-it's almost-gray cotton skirt and the nearest clean shirt. This isn't normal.

Serge Lutens Un Lys seemed like the perfect scent for that mood, but much to my surprise, it wasn't. I still enjoyed it, but in the summer the grainy almost-edible candylike note outweighs the drop-dead feminine floral. It may only be a fully feminine scent in winter, when I'm wearing soft wooly things instead of linen or silk.

Sunday, I wore Art of Shaving Sandalwood as a layering experiment, because the scent of Un Lys was still lurking, defying the intervening bubble bath. (You can't accidentally perfume your glasses, can you?) The layering failed; both are on the edge of too sweet, and they drowned each other's sharper notes, with a result that fell over that edge.

Later, I reorganized the perfume stash, identifying about eight bottles and perhaps sixty samples to give away. This is relevant because my sample of Carthusia Capri(?) chose to leak all over my hands, so that's what I wore Sunday night. It was surprisingly enjoyable; I'll be wearing it on purpose soon, to see if it was nice on its own merits or only because it was refreshingly sour against all that sweetness.