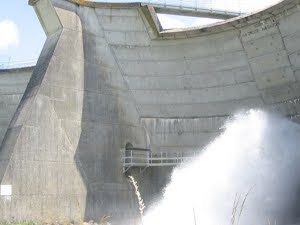 I have a four (four) ounce bottle of Creed Original Vetiver.

I only wanted one ounce - or, really half an ounce - but several months ago the trustworthy seller offering both a coupon and a sale only had the big bottle, so I paid less for four ounces with box and cap than I would have paid for a small tester without either. So there it is, looming threateningly over the nice little bottle of Love In Black, sneering at me and holding more perfume than I will ever use.

It bothers me. It's that whole anti-hoarding thing. It feels like a slippery slope. I want the smallest possible bottle.

So today I'm wearing Original Vetiver, frankly in the hope that I'll find that I no longer like it, so I can give it away. That's going fairly well so far - it's pleasant and green, but I'm finding it too one-dimensional and too masculine, and wishing that I were wearing Vetiver Tonka instead. And my Vetiver Tonka is properly anti-hoarding - it's one of the tiny Discovery Set bottles.