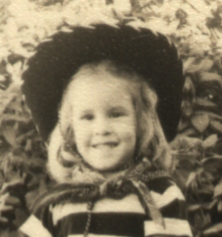 Lady Stetson is an extremely inexpensive drugstore perfume, but one that Luca Turin decorated with four stars. So I didn't know what to expect. And I still can't decide what I think.

Now, I have no doubts about the top notes - I fervantly disliked them. Sneezy aldehydes combined with a touch of artificial sweetener. Blurgh.

But as it dried and developed --

I'm going to pause here to note that it did develop. Lady Stetson is definitely not linear. There are at least three distinct phases.

-- as it dried and developed, I liked it better. There was a growing warmth and depth, a sort of glow behind the sneezy aldehyde prickles. And also a large dose of soapy white musk, but a musk thoroughly pureed with something woody, something sweet-gourmand and perhaps something the faintest bit animalic. The blend works - this is the rare perfume containing white musk that doesn't give me any basement washing machine vibe at all. That, alone, is a significant accomplishment.

But I'm puzzled as to what it actually smells like. It's officially an aldehydic floral. People smell peach in this, and rose. To me, it's not at all floral - at first I get aldehydes and Nutrasweet, then it turns to wood and soap with a little bit of sweet gourmand. The final drydown is much more gourmand than floral to my nose - the Basenotes reviewer who mentions eggnog is closest in my view.  Angela from Now Smell This mentions amber and ylang ylang, and I sense them as well, but they both blend into the gourmand mood.

I like the drydown very much. I hate the top notes with a fiery passion. I'm not quite sure about the middle. This is going to make it difficult to wear, because the drydown is very subtle - to have as much of it as I'd like at the end, I'll have to marinate myself in aldehydes and Aspartame at the beginning.

But I will be wearing it again.