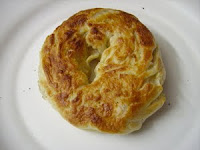 When put to the test, however, it invariably produced a plastic cup filled with a liquid that was almost, but not quite, entirely unlike tea.
The Hitchiker's Guide to the Galaxy, by Douglas Adams

"Daddy, how come in Kansas City the bagels taste like just round bread?"
Abigail, Calvin Trillin's daughter, as quoted by him in Feeding a Yen: Savoring Local Specialties, from Kansas City to Cuzco

Long, long ago, I fulfilled my work study obligation at the Kiltie, our college cafeteria, in Pittsburgh, PA. There was a girl who came to me on Sunday mornings, always looking for sliced raw onions. This being the days before twenty-four hour salad bars, she was always turned away disappointed. One day she explained her need: Back home, far from Pittsburgh, she was accustomed to eating bagels, cream cheese, and lox for breakfast on Sunday mornings. Sunday just wasn't right without that breakfast. So she was trying to duplicate it, and the closest that she had come was bagels, cream cheese, and raw onions.

Calvin Trillin's piece, "A Softball, a Lump" describes the travails of three young lawyers exiled to Omaha, far away from the gastronomic delights of Kansas City, Missouri. They rhapsodize over the shape and dimensions of the steak at a Nebraska steakhouse, in an effort to convince themselves that it's just as good as what they ate back home.

People will go a long way to reproduce the comfort of the familiar. I suspect that this explains the continued existence of perfumes that are reformulated to be almost, but not quite, entirely unlike themselves.

And that's what I thought of when I smelled Charlie. It smells like a memory. A faded memory. An attempt to resemble something else - a something else that was probably Charlie in a past life.

Now, the memory that Charlie is trying to imitate is not in my memories - to the best of my recollection, I have never before smelled Charlie. For all I know, the modern version may be utterly true to Charlie's original inner self, and I may just not be a Charlie fan. But I'm doubtful.

There seems to be some disagreement on the notes for Charlie - if I combine sources, I get aldehydes, citrus oils, lemon blossom, hyacinth, tarragon, jasmine, peach, rose, orrisroot, lily-of-the-valley, cyclamen, carnation, vanilla, sandalwood, oakmoss, musk, and cedar. And, yeah, I can smell it trying to accomplish that, but it just doesn't have the resources to do the job thoroughly.

The top notes smell thin, and jumbled, and prickly. They don't seem to be part of the show, but instead something that you need to wait out, rather like a band tuning up.

The middle is better. Hyacinth, yes. Jasmine, yes. I think that I can even distinguish between them, rather than just getting "shrill mixed floral". The orrisroot is presumably represented by the powder, a bit coarser than the silky powder that I prefer, but it would pass with powder-lovers. And it's not pure sweet or pure floral - I can't pick out the oakmoss or whatever's playing that role, but there is something calming and darkening the mix, just a bit. And the base is better - vanilla and wood, yes, I get that, and the remaining floral notes are deeper in pitch.

The notes list is that of a lovely fragrance. The fragrance itself makes an attempt to present those notes. But there are just too many compromises. This is the round bread, not the bagel.

Review Roundup: Now Smell This and MakeupAlley and Basenotes (I think - what's Charlie Blue?) and Fragrantica and Feminine Things and Yesterday's Perfume.

Link Roundup: The Scented Salamander (a retrospective of Charlie advertisements).

(Edited to expand the Review Roundup.)

Image: By Alnokta. Wikimedia Commons.
Posted by Martha at 5:42 PM