SOTD: None again, and a ramble about fiction 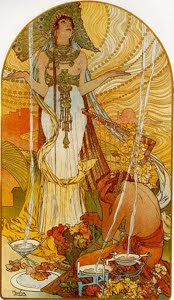 So, my Perfume Brain seems to have gone temporarily idle, as evinced by the high frequency of short perfume posts. I expect it to be back soon. But meanwhile my Fiction Brain seems to be creaking to its feet. So why not talk about that?
I love fiction. In a sense, I've been creating fiction my entire life.
I just haven't actually been writing it down.
I've been creating plots and scenes ever since I was a kid. If I wasn't reading, I was daydreaming stories. My Skipper doll went walkabout in wilderness that only I could see.  When my book of the moment turned out to be boring, I spent schoolbus rides directing action in my head, maybe creating something new, maybe adding a little danger and chaos to that old Monkees rerun that I saw the day before. Murder, mayhem, adventure, mystery - I'm not, and never was, one for the peaceful and uplifting in fiction.
I created fiction every single day. But I hardly ever wrote any of it down.
When I got to college and Himself introduced me to roleplaying, I fell in love with the 1920s world of Call of Cthulhu. Professors and private eyes and antiquarians and flappers and, of course, unspeakable monsters and crazed cultists.  I "wrote" adventures, in a sense - I created plots, and character descriptions, and maps, and described the world and the goals of the bad guys, and I lured in the good guys, and I refereed what happened, and I played many, many characters in the fictional world.
It was so much fun. But I didn't actually write a story, just the outline. The story was created when the players got there. So I was doing my part in creating fiction, but it was a momentary thing, nothing but memories when it was over. Great memories - I may well value those games more than I'd value writing a book - but nothing permanent to pull off a shelf.
After everybody graduated from college and we moved to the adult world outside the dorms, the roleplaying shifted online, to chatrooms, MUSHes, MOOs.  Dozens of people creating collaborative fiction. No automation, at least not if I had any say about it. Just roleplaying, people writing a cooperative story. But even though it was in words and you could save the log, the log was still just a shadow of the experience. It really wasn't much more permanent than the face-to-face roleplaying.
But that was years ago, and online roleplaying is essentially gone, as far as I'm concerned. It's all code, all very high quality video games. More people seem to enjoy it more, but it's not for me.
So I need my fiction outlet. So it may finally be time to...
(ominous music)
... write some.
Now, I've written some. I did do NaNoWriMo last year. I've written stories now and then. But the fiction that really captured me was the daydreaming and the roleplaying. The rest was... meh. An experiment. I think it's time to figure out how to put some heart into it.
Image: Wikimedia Commons.
Posted by Martha at 11:10 PM