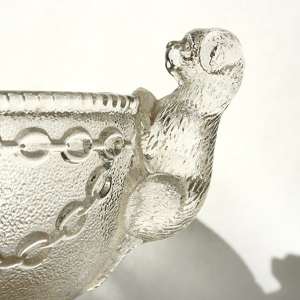 A recent discussion on Muse in Wooden Shoes motivated me to try Chergui again. In the comments, I didn't agree that it was musty, but I've changed my mind. It's honey, tobacco, sticky pastries, and old-house mustiness.

I used to be a bit doubtful about this fragrance, but it's growing on me. Wondering why, I find that the old-house note reminds me of a great-aunt's house that my family visited many times during my childhood. The surprise is the realization that I have positive memories of the place.

We were the sort of frugal family that spent all holidays and vacations staying in relatives' homes, with the kids permanently planted on the sofa listening to the adults reminisce about the decades before they were born, telling the same stories year after year.

I have a photo-clear memory of an evening in the home of someone's cousin or school friend, when a son of the family offered me a book of Doonesbury cartoons to read. Compared to the usual experience, it might as well have been a ride on Star Tours. I had a mild crush on the son (who I believe I never saw again), and a tremendous fondness for Doonesbury, for years afterward.

I remember how orderly all of those houses were, my great-aunt's most of all. The furniture and ornaments were generally older than me, and often older than my parents - this wasn't a family that went in for decorating trends. But every single thing was impeccably maintained, dusted, cleaned, un-shabby, and when someone chose it, however long ago, they chose it carefully.

This being the American South, most houses had the traditional "for company" living room and dining room. Furniture was arranged in one position for a lifetime, and ornaments, down to the doilies, were almost as permanently fixed. The only thing likely to change in these spaces was the multicolored hard candy in the cut-glass covered dish -- another spark of excitement for visiting children bored out of their tiny minds. In one way, this sounds simply dreadful. But in another way, it reflected a commitment and attention to detail in the home environment that I craved.

My parents weren't all that interested in our home -- it was adequately furnished, adequately maintained, generally adequate. The roof didn't leak and the appliances all worked, but nobody loved it. Drawer pulls fell out and weren't replaced. Drawers got stuck, and no one squared up the furniture or ran soap along the runners. The furniture was whatever was sufficent and cheap enough when something wore out. Shabby spots happened - nobody cared enough to get those extra pieces of fabric for the arms or the heads of the chairs, at least not until the fabric was already worn through.

I particularly remember the rice pot. It lost its handle and the knob on the lid, and for my entire childhood, we lifted the lid with a bent fork poked into the hole the knob left behind, and lifted the pot with a hot pad wrapped around the metal stub that once held the bakelite handle. And nobody ever considered buying a new pot. It wasn't that we couldn't afford one, it was just that nobody ever looked at that pot and said, "This is silly. This is depressing. Let's get a new one."

So when I sniff Chergui and see my aunt's impeccable living room, full of overstuffed furniture twenty, thirty, fifty years old and infused with mustiness that even the most determined housecleaner couldn't remove, everything clean and carefully placed, wooden floors shiny enough to go sock-skating, that awful sentimental figurine on top of the piano , and all that uncluttered  space between the furniture -- that memory smells good to me.

Image: By Takk. Wikimedia Commons.
Posted by Martha at 11:59 PM