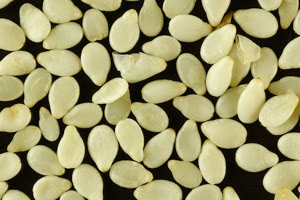 Szechuan Garden was a Chinese restaurant a ten-minute walk from our house. It had a lot of good food, but my very favorite dish was the sesame chicken. This wasn't the usual version of the dish, the kind with a thick batter dotted with an occasional sesame seed and dipped in sticky sauce. Instead, it was just thin, wide, planks of chicken breast coated in a thick layer of sesame seeds (presumably glued on with egg) and fried to golden brown, served crisp and dry, and begging for the eater to sprinkle on plenty of salt. I don't think that there was any dipping sauce, or if there was, I ignored it.

It was plain. Bland. Distinctly boring-looking. And to me, delicious. The subtle variation in flavor and texture between chicken that was a couple of millimeters thicker or thinner, or seeds that were fried a little more or less brown, was fascinating. I preferred thinner chicken and browner seeds, but much of the pleasure in that variation came from the contrast with the areas that were thicker and less brown. I want some right now, and I can't have any; Szechuan Garden is gone. I need to order some more bags of sesame seeds and continue my effort to duplicate the dish.

There are perfumes that have a similar delicious blandness, an apparently plain flavor that I can't quite put my finger on, but one that makes me want to gobble, chasing the taste.

Strange Invisible Perfumes Fire and Cream is the first fragrance that comes to mind. It doesn't offer obvious flavors - no obvious sweet, or bitter, or green, or "fresh". Instead, it's a mix of notes that disguise and change each other. I can't get a grip on the patchouli or tuberose; the lavender and sandalwood freshen them into unrecognizability. But I can't quite smell those; the barely-there orange sweetens them out of character. And the frankincense and orange blossom add an odd, dueling fog over the whole mix.

The same way that I used to crunch across a piece of sesame chicken, seeking out browner seeds or crunchier bits, I keep sniffing Fire and Cream, chasing after the orange, then the lavender, then the tuberose, and never quite catching any of them.

L'Artisan Navegar has a similar quiet complexity, mostly cedar, but it's a faint ghostly cedar mixed with hints of other notes - maybe cucumber, maybe spices, and something a little watery. The now-sweet, now-bitter powdery and milky scent of Serge Lutens Douce Amere is another entry in the category. And Hugo Boss Boss Woman, of all things, has some of the same appeal - it's terribly bland, but I keep sniffing at it.