SOTD: None, and Last Saturday, and The Mall 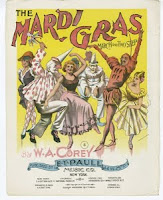 Himself and I have a custom known as Last Saturday.

The idea is that discretionary purchases - DVDs and movie posters and murder mysteries and soap dishes and big-screen televisions and scrunchies and, yes, perfume - must occur on the last Saturday of the month. If a proposed purchase isn't basic groceries or an otherwise immediate need (like, say, the rainy season just started and we've discovered that all appropriate shoes have become worn and leaky), it waits for Last Saturday.

There are two reasons. First, the requirement to put off these purchases for a few days or weeks increases the likelihood that we'll decide that we don't actually need whatever it is. Second, when a month's worth of discretionary purchases are all piled up in one day, purchasing them all looks like financial suicide, so we're likely to do some cutting.

Actually, no, so far it's been a very small Last Saturday. I say "so far" because there's one hour left, and the whole wide Internet is out there. But I was surprised that even though we stopped by the mall, on Last Saturday, very little self-control was required. I think that this is a sad, sad commentary on the state of department store fragrances. Actually, on the whole mall - they don't even have a bookstore any longer! - but I'm talking fragrances right now.

I ended up coming home with only two small perfume-related purchases:

A mini roll-on of the new L'Occitane Paeonia Eau de Toilette. The Nice Salesperson offered me a test strip of this, and I liked the grapefruit in the top notes, so I bought the mini with unseemly haste rather than wait until the next Last Saturday.

Fragrantica says that the notes for this one are bergamot, grapefruit zest, peony, rose petals, sandalwood, and musk. I mostly get the bergamot and grapefruit, which is just fine with me, though I'd be happy if the sandalwood came forward. It's a friendly little perfume, low projection, not too sweet, not too aggressively "fresh". I'm pleased that I bought it, though I think a mini is just about the right portion for me.

Speaking of minis, I very much like L'Occitane's choice to offer mini sprays or roll-ons or tins of many of their scents - that decision is responsible for almost every L'Occitane purchase that I've made.

The second purchase was a mini roll-on of Kiehl's Pear scented essence oil. Yum. When I first sniffed this I thought that it was a little cartoonish, but as time goes on it smells increasingly like a real, slightly overripe, pear. It's a note more than a perfume, but it's a very nice note.

And that's all. I did do my usual check on Tom Ford Velvet Gardenia, and it was gone. My thrashing around about this has been endless; I've wondered if I'd be relieved or dismayed if this disappeared before I bought a bottle. Turns out that I'm relieved. Whew.

And I tried a spray of Guerlain Jicky parfum. I can never resist an unexpected pure parfum tester, and I wanted to try the civet classic. Sadly, I don't like this any better than the Shalimar parfum that I tried a while ago - though this time Himself didn't threaten to evict me from the car. There's a common element in both - Guerlinade? - that I don't like at all.

So that's Last Saturday. So far.