The kitchen garden is bare and bleak right now. In the summer, it was a happy tangle of vegetables. Most have died back, but the Swiss chard and parsley are still alive. More than alive, they're thriving. 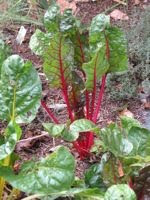 The problem is, we don't eat chard. Ever. Why, you may ask, do I grow plants that I don't even plan to eat? Well, you know those days when you want to plant something and there's nothing available that you should plant? The Grange had rainbow chard seedlings that day.

So we have plants that we don't eat. Useless plants. Except that they look great. In December.

So rather than correct my error and plant things that I'll eat, I'm planning to compound the error next year, by planning and planting a purely ornamental winter kitchen garden. Purely ornamental, but I demand that the plants be vegetables - normal table-quality vegetables. I'm strange and, well, strange, that way. 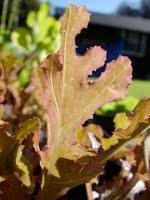 I want this garden to be pretty. And somewhat orderly, unlike the design of the summer jungle. Geometric. And it should make you hungry. I'm imagining something that you could see Peter Rabbit hopping through. Though without the big expanses of carefully weeded dirt, because nobody likes doing all that careful weeding. It should be neat, orderly, and crowded.

I believe in repeating successes. So I plan to include rainbow chard again, probably Bright Lights, for multicolored stalks and glossy green leaves.  And curly and flat parsley for two different kinds of green froth. For the flat, Giant of Italy looks to have particularly nice, dark green leaves. For the curly, I generally feel that curly is curly.


And I'd like to add winter lettuce, for more colors and shapes. I'm inclined to start with heading lettuce, for nicely geometric arrangements, and I'm fantasizing about what I'd do if I actually grew it from seed.  I've always loved the look of Merveille des Quatre Saisons - red and green, with lazily textured leaves. Winter Marvel, all green, another relaxed rumpled butterhead, ought to work in winter. Lolla Rossa is red and green and as un-lazy as one can imagine, with frizzled just-had-a-fright leaves - it may not be orderly, but it's dramatic. And, well, lettuce is endless. Romaines would be another good anchor for orderly patterns, and oakleaf would look pretty on the edges. And that's barely scratching the surface.

But if the mild winter isn't quite as mild as I think, and the lettuce freezes out, there's kale. Red Russian, Lacinato "dinosaur" kale, curly kale, and probably any number of varieties that I've never heard of. But not the purely ornamental kale. Gotta be edible.

Now we have an expanse of leaves, begging for another form. Leeks, tall baby leeks, for stalks of green emerging from the froth, should do that. Or maybe tall monster leeks, like King Richard. Onions and greens, a visual salad. That should make me hungry.

Also, fava beans and peas for ground-filling greenery, and those odd little flowers, and eventually pretty little pods. And I remember a year when favas did a fantastic job of weed suppression, so I'm hoping that they'll do it again.


I think I'm too late for this year - most of these plants need to be started in fairly warm weather. But I'm making firm plans for next year. 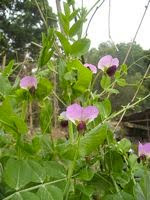 And the Nice Folks Next Door eat vegetables. Maybe they'd be willing to eat those greens. Or maybe their ducks would?


Link Roundup: I wandered the web for ideas, and found some pages and sites that I want to remember:

An article about winter gardening from Throwback at Trapper Creek.

Another about winter lettuce trials at The Westside Gardener.

A good discussion and list of winter vegetables at Vegetable Gardening and Greenhouses.