Ramble: Blogging: Letters, and blogging, and the return of writing 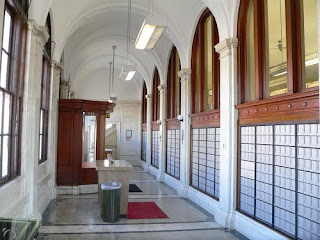 Back to blogging about blogging, continuing from some of the thoughts from this post.

I've always liked the idea of collections of letters. If I search on "correspondence" on Amazon, I find book after book of of them. Letters by Truman, Machiavelli, Catherine the Great, immigrants, gardeners. Letters by famous people, letters by ordinary people.

In fact, when I was a kid, in the latter part of the stone age, people rarely wrote anything that they weren't required to write. School essays and work reports, sure, but just writing on an everyday basis, beyond an occasional scrawled note to the kid's teacher or the milkman? It just didn't happen. If people wanted to stay in contact with someone, they called them on the phone.

Then the Internet came. When I was in college, you pretty much needed to be in college, or work for a sufficiently geeky company, to have Internet access. And it was primitive - Telnet, EMACS, Usenet. Right around the time that I graduated, it became fairly easy to get an individual account, though we had to buy access from that guy who was trying to defray the tens of thousands of dollars that he paid for the Unix box sitting in his garage. And argue over who got to dial up on the one phone line, until we broke down and just got two.

Then the web came. And high-speed connections. And WiFi. And Internet phones.

And now everybody writes.

For the first time in perhaps half a century, a very large number of people regularly, often daily, express themselves with the written word. Email. Chat. Forums. Texts. Facebook. MySpace. Blogs. Much of it may not be good writing, but it's writing. The self-written word, gone for decades from the average person's experience, is back.

I find this exciting. I think that when letters went away, we lost an important mode of expression. People writing about their lives, or their kids, or their gardens, or their cup of coffee, or their perfume, or that perfect hat - for a long time, that was largely gone from the world. Sure, a few published writers give you that close, quirky feel - Calvin Trillin, Henry Mitchell, a fair-sized scattering of columnists and authors. But it's different, at least in principle, if the writer has to make it through the "publishable" filter.

So that's why I love blogs, and why I don't care too obsessively about traffic numbers or mass appeal. After all, back when people wrote letters, each letter got the equivalent of one "pageview" - or maybe a few more, if your correspondent passed the letter around the household. It wasn't written for the whole world. It wasn't written to get a check from AdSense. It was written because in your life, something happened that gave you something that you wanted to say.

Of course, it's nice when more people want to hear what you have to say. I expect that Elizabeth Lawrence might have found it exciting that her letters were of interest to enough readers to result in a published book. (Then again, she might have been horrified.) But the main thing that I'm celebrating in this particular ramble is that writing, individuals writing, is back.

Photo: By Ammodramus. Wikimedia Commons.
Posted by Martha at 4:20 PM