SOTD: Balmain Vent Vert, or, Is it possible to have too many greens? 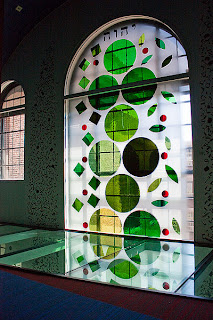 I was debating what to wear for my Scent Of The Day, when the doorbell rang and a package addressed to me landed on the porch.

That usually means perfume, and it did: Balmain Vent Vert. So that answered that question. After the Cellophane Opening Ceremony, I applied four spritzes which, judging from Himself's reaction, was about three too much. But I'm enjoying it. I'm finding that the drydown, which was nice enough with the sample, is much nicer when you're wearing plenty of the stuff.

But looking at The Collection, I became uneasy. Why did I buy Vent Vert? Well, it's the matriarch of classic green florals, as I discussed in a previous post. It's a galbanum perfume, and if you've been reading along you know that I'm a galbanum freak. And it was, frankly, cheap. And I can give away decants!

And I'm sounding like a hoarder. This isn't good.

Because there are reasons against it. This isn't the classic version of the classic - it's the second reformulation. There would be ample reason for buying the original, dark green, slightly ominous version of Vent Vert. Is there any reason besides history (sentiment - the hoarder's excuse) for buying this one?

And so are Le Labo Jasmin 17 and Hermes Vetiver Tonka and Miller et Bertaux Green, Green, Green, and Green and Balmain Ivoire, all of which I want to own. (OK, those aren't all green florals, but they're all green.)

I'm sure that there's such a thing as too many greens. I'm just not sure if I'm approaching that line, or if I passed it long ago. It may be time to get a grip.