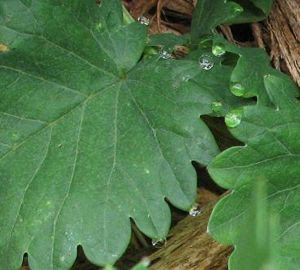 So I did some cleanup a few days ago, and a little more day before yesterday, and yesterday morning I went out there to do the final touches.

Looking at it, I realized that it didn't look so good, if you don't know the reasoning behind the decisions that I made. Much of the path was full of salad burnet, a nice little plant that is great for weed suppression, but is tall for a neat-looking path plant. What wasn't covered with salad burnet was covered in natural dead-leaf mulch, which is also good for weed suppression but looks as if you're too lazy to rake.

The vegetable beds were scattered with desirable volunteers - California poppies, salad burnet seedlings, and a green mist of something that might have been a weed and might have been a resurrection of a desirable clover cover crop. I planned to leave it there for another couple of weeks until it revealed its nature, and only then weed it out if it turned out to be the weed. 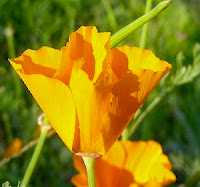 This is how I garden. I don't know what it's called - I believe that the opposite, where you clear out decaying matter and weed out all uninvited plants, is called clean culture.

So I was rehearsing how I'd explain all this when the city representative came for the inspection. He's a nice guy, but he likes a tidy garden.  I was afraid that he might tell me to change things, that I'd have to make another appointment for another inspection, and that there might not be another appointment, because I'd left it late.

Then I thought: I could just clean it all up to his standards.

That simply hadn't occurred to me before.

Just because I have a preferred gardening style doesn't mean that I have to follow that style when outside forces make it a problem. Going clean culture, either for the inspection or even all year, wouldn't violate any core principles. It's not as if I'd need to use any chemicals or engage in any other practices that I strongly disapprove of - it's a tiny plot; I can just weed. And mulch with more conventional mulch. A compromise would be no big deal.

But compromise simply hadn't occurred to me before. My thinking was entirely focused on how to justify doing things exactly the way that I wanted. The "is it worth it?" question never entered my mind. Now it did, and I asked myself whether my not-that-strongly-held gardening preferences were worth the worry about whether I'll pass inspection, and worth the possibility that I could lose the plot if a re-inspection isn't possible. 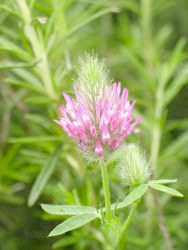 And, no. They weren't. So I cleared the path down to dirt, slaughtered the volunteers and the green mist, and generally got the garden pretty darn tidy. I don't know if this was necessary, but we passed inspection without a hiccup.

I think that this blindness to possible compromise is a large part of the motivation behind hoarding. I never understood it in hoarders, and now I understand it much better.

I love my home, and it's very important, but specific details of cleaning and housekeeping aren't a big issue for me. Being a good housekeeper isn't a big part of my identity, so once I realized This Clutter Doesn't Need To Be Here, I was able to get rid of a lot of it. And any housekeeping methods that keep the place reasonably clean and reasonably tidy are fine with me.

I can see that it would be different for someone whose identity is partly composed of their view of themselves as a good housekeeper, or their view of themselves as being free of errors or compromise in standards. It would be hard to throw out something that they could donate, to donate something that they think that they might use, to fail to recycle every little thing. I've always argued that perfectionism is a huge part of hoarding; now I guess I see a bit more of what's driving that perfectionism.

My identity as a gardener is important to me, so I think that's what caused the blind spot. I liked the idea of being an uncompromising natural gardener. But realizing that, yeah, compromise is not only possible, but fine, was a good experience.