BOTD: Perfumes: The Guide, by Luca Turin and Tania Sanchez 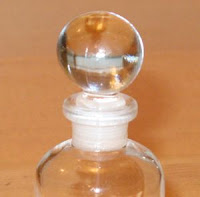 An update to Perfumes: The Guide is coming out. I'm excited.

Imagine that most press about movies originated with press releases from the studios themselves. And imagine that someone invented the concept of the movie review, and published a fat book of reviews of modern and classic movies. Imagine the excitement of movie buffs, and the scrambling to acquire copies, and the comparisons and arguments and cries of triumph (when opinions are vindicated) and gnashing of teeth (when they're not) that would result.

That vision should allow you to imagine the response of perfume freaks to Perfumes: The Guide.

Objective reviews have not normally been a part of the perfume world - when a perfume did get press, it was generally praise. The first version of The Guide, when it came out in French in 1992, must have created quite a stir. And I can testify that the English version, published in 2008 and offering reviews of 1500 perfumes, produced its share of excitement.

By then, the Internet was well-populated with perfume blogs and forums, and countless people expressing their opinions of old and new perfumes. But The Guide provided a single broad-ranging source of opinions by two respected names in the fragrance world, Luca Turin and now Tania Sanchez. The reviews, the ratings, the top tens, what got five stars, what got one star, what they rated, what they didn't rate - it's all fuel for endless discussion and argument.

And these people can write. I offer an excerpt from my favorite review, the one of the classic Chanel No. 22:

"Aldehydes are said to give 'lift' to a fragrance. .... Chanel 22 goes for the maximum-payload record as follows:
(1) Determine the largest dose of aldehydes a human can stand without fainting.
(2) Load it up with as much sweetness as the aldehydes can bear.
(3) Round it off with a note of iris to make it look easy.
(4) Stand back and watch the whole thing lumber off into the sky after a three-mile takeoff roll."

The mockery is gentle and affectionate for high-rated perfumes like No. 22 (it got four stars out of five). It's less friendly for the lower rated perfumes - a one-star perfume review consisted entirely of: "Only hard work and dedication can produce something as derivative and uninteresting as this."

I have the 2008 edition of The Guide. For a while, the authors published quarterly updates, but I never quite got around to buying them. So I'm pleased about the new paperback edition, which will incorporate them and a few extra reviews, for about 450 new reviews. Woohoo!