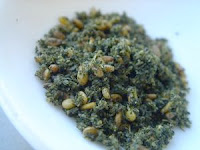 Occasionally, I'm driven to reminisce about Lost Foods - fabulous foods that no longer exist. The dessert that I described in my dessert rant was one of them.

A discussion of Greek-style yogurt on Perfume of Life reminded me of another one. A restaurant in Ashland, Oregon used to serve what they called the Za'atar Dipper. It was Greek-style yogurt - a thicker, tangy, strained yogurt - served with a well of olive oil and their za'atar spice mixture.  They served it with warm fresh pita for dipping.

They took it off the menu, and now the restaurant itself is gone, so I'll have to duplicate it myself.  I can get Greek yogurt, or make a reasonable facsimile by straining it myself. I can get olive oil. I need to research za'atar. And I don't know where I'll ever get such wonderful pitas. But if you have access to all of these things and never thought to combine them, do.

Photo of za'atar by Sjschen. Wikimedia Commons
Posted by Martha at 7:42 PM