So I've formed a theory about the seasonal change in perfume preferences.

As I mentioned in another post, my perfume preferences change drastically when the season changes.  As the season starts to shift from summer to winter, citrus and fruit and mint and fresh bright florals are right out for me, while sweet gourmands, leather, musk, wood, smoke, and spices are in. And the whole process reverses as we approach spring.

Now, this makes sense if you just explain it by context. When the leaves start to turn, it looks like fall. So you start to want things associated with fall.

The problem with this theory is that the phenomenon starts in late August and early September. At that time, the leaves aren't turning. In California and Oregon, where I hang out, everything still looks and feels like summer. It's warm, it's bright, everything is still blooming. It seems premature for context-driven preferences. Nothing has really changed.

Except for day length.

The longest day of the year - the most hours of sunlight - is around June 21. After that, the days start getting shorter.

Day length triggers all sorts of things. It tells onions to start bulbing. It tells birds when to get moving in their migration. It tells plants when to flower and fruit. So I suppose there's no reason why it shouldn't tell humans when to start craving coffee and wood, rather than lemon and mint.

And, once I got the idea to search on things like "day length" and "scent cravings", I went Googling and found that meadow voles change their odor preferences based on day length. So there we are. All explained. 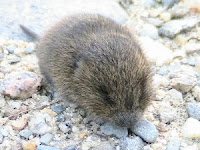 So what survival characteristic is triggering, or mis-triggering, in humans to produce changing perfume cravings?

I can theorize that part of it is exactly the same as the voles. In winter, I like scents of musk and leather and civet and other animalic or sweaty scents, better than I like them in summer. In other words, in winter, I have a greater liking, or at least a greater tolerance, for smells associated with being near other creatures. For a season when being indoors with a bunch of warm people is probably good for survival, this seems like a useful thing.

Another part of it is surely about food. More Googling tells me that winter sunlight deprivation causes a winter shortage of serotonin. Eating carbohydrates helps cure that shortage. As a result, people commonly have cravings for carbohydrates in winter. So that seems like an explanation, right there, for the winter craving for sweet foody scents.

So the theory, totally unsupported by any data, is that in the winter, I crave the scents of things that are good for me in the winter - or the things that were good for my ancestors in winter thousands of years ago, when my wiring was being designed. No big surprise there. And the other part of the theory is that that craving is triggered not by actual winter - not by changing leaves and cold - but by the earlier and more subtle signal of shortening days.