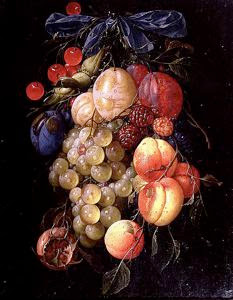 This is another Germaine Cellier classic - except, no, Bois de Jasmin tells me that the Osmetheque credits Jean Carles. Hmm. Well, I'm glad that my hunt through Cellier's perfumes led me to this one, even if it's not one of hers.

Originally released in 1945, it was reissued in 2007, formulated by Aurelien Guichard, who was the creator of the much-praised Bond No. 9 fragrance Chinatown. I can't speak to the original Visa, though I may send off for a decant one of these days, but I like the reissue.

Remember how Robert Piguet Bandit's leather was unexpectedly shy when dabbed? That's not a problem with Visa. After decanting my vial into a sprayer, I found myself with damp fingers and a damp vial, so I applied those traces to my skin and waited a while before spraying any on. That minimal application produced a distinctive cloud of rich, rather sharp leather, with just an edge of fruit.

Sprayed, the proportions flip - the leather is still evident, but the fruit is dominant. This isn't the usual sweet summery-fresh sort of fruity - it's autumn fruit, slightly overripe and starting to ferment. I'm very familiar with this scent right now, because much of our summer pear harvest is still lurking in the refrigerator, determinedly ripening despite our best efforts to slow it down. It's really a glorious scent, though the pleasure of being enveloped in it every time I open the refrigerator door is somewhat marred by worry over whether we'll ever eat it all.

So I'm enjoying Visa's guilt-free version of the same experience. It reminds me of descriptions of the "boozy" fruit notes of some Serge Lutens fragrances. But while I never seem to like the fruitier Lutens creations, I like this very much. The fruit is rich and thick, and so is the leather. Neither of them drown you with honey or syrup - this fragrance is sweet, but it doesn't quite cross over into too sweet.

The only problem is my strong suspicion that I won't like it at all in the summer. But I'm disregarding that; this is definitely now on the "want a bottle" list.

Review Roundup: Bois de Jasmin and For The Love Of Perfume and The Non-Blonde and Perfume-Smellin' Things and Shoes Cake & Perfume (about the vintage) and Yesterday's Perfume (about the vintage) and PereDePierre and WAFT and The Scented Salamander and Fragrantica and Eiderdown Press and Grain de Musc (vintage and new) and ThinkingShift and My Perfume and WouldSmellAsSweet.