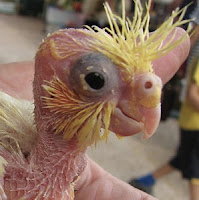 So. This writing thing that isn't happening. What's the deal?

I could, in theory, just ramble on without any subject--which is what I'm doing right now, can you tell? Except, I look around for inspiration and the lack of subject persists.

Did you know that Wikimedia Commons offers a "random file" option? When I'm trying to write my one-hundred-words-a-day of fiction, another thing that I haven't been doing, I sometimes use that for inspiration. For example, I just encountered a really terrifying dorsal view of an ant. A few dozen images later, and I see a giant ice cream cone apparently dropped on a building. Then a whole lotta bacon, sadly un-crispy. And then a gif of a rotating brain.

I'm vaguely stunned, but not so much inspired.

I think that it would be handy if the "random file" feature could accept search terms. So that, for example, I could get a random cat picture.

Sometimes I search for the obvious and get a surprise. For example, I just searched for "baby chicks", expecting the cute and fluffy, and got the cockatiel chick that's the picture for today's post. He is cute, I think, in a spiky and alarming sort of way.

So. "Just write something!" has failed to produce brilliance, but I'm posting anyway. And that is all.