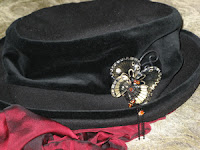 I've never been into fashion. I always used to see it as a frantic race by everyone to achieve the same magazine-picture standard, with the competitors possessing fewer resources being doomed to fail. Yes, in theory everyone could have their own take on clothes, but none of the relevant phrases spoke to me. Personal style. Fashion trademark. Signature style. Blah. Isn't that all just about whether you buy the latest shirt in the latest cut in blue or red or green? I saw it as a competition, and I wasn't interested in signing up.

But I was out today, in that hat in the picture, with that pin, and that scarf, and a heavy black sweater and a long black skirt, and I realized that I was mildly enjoying my clothes. This was a surprise. The enjoyment didn't seem to be about fashion, but more about silliness and self-expression, like a kid playing dressup. Or like my childhood insistence on red sneakers, one that according to Mom was stated so firmly and with such sober determination that she was a little afraid of my single-digit-age self.

Fashion as self-expression rather than competition shouldn't strike me as a revolutionary concept, but I must admit that it does. And as soon as the thought came, a phrase came with it: fashion voice. Like, y'know, writing voice, or blogging voice. The way that I express myself, rather than the way that I (don't) frantically chase that magazine picture.

Now, Googling tells me that I didn't coin the term--searching on "your fashion voice" gives me over a hundred thousand hits. On the other hand, "your personal style" returns five and a half million, so "fashion voice" still manages to fit in with my contrary insistence on coming to popular subjects from a nonstandard direction.

It's interesting that my decision to utterly abandon fashion is responsible for my finally starting to find my fashion voice. A few years ago, I decided to declare a uniform, to avoid having to make fashion decisions, and thereby avoid exposing my incompetence in that area. But once I decided that every garment would be black, every skirt would be long and straightish, every shoe would have zero heel, that all combined into, well, almost a plan. And then I started buying the scarves, and some gaudy modern jewelry, and some vintage costume jewelry, and things like little black velvet gloves with red fabric roses. All to contrast with the black.

And for the first time, at forty-odd years old, I'm starting to enjoy clothes. This is fun.

Labels: Being A Girl, Fashion, My Photos, Rambling