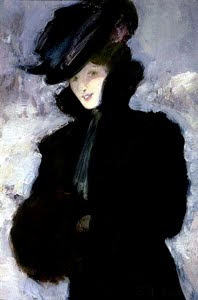 You may recall my Monsters and Civet and Patchouli post, where I debated buying a quite reasonably-priced quarter ounce of Jean Desprez Bal A Versailles parfum. I did.

It arrived while we were out of town, and I feared its reputation enough to ask a kind neighbor to bring it in and put the box in the bathtub for the interim, just in case something might be leaking in there. I'd hate to have to rip out the floors.

I returned, eagerly opened the box, sniffed the opened bottle (yow!), and nervously put it away while I tested less scarey things. Today, I finally got up the courage to dab some on.

The very first notes, the first few seconds, are a rather unpleasantly-sweet floral, reminding me of inexpensive oversweet candy or plastic flowers. Perfume Posse said Necco Wafers and I'm grateful - it fits exactly, and I like that image much better.

In less than a minute, the candy fades, though it's not quite altogether gone. The civet announces itself, along with un-plastic, un-candy floral that must be the jasmine. (For some reason, I have trouble placing jasmine. I suspect that it's because it's used so often in perfumes that I just translate it as "perfume floral".)

It ambles along for a while on floral powder, with the animalic notes peeking out, but only because I know they're there - it's perfectly respectable and ladylike. It's very sweet, but not a white-sugar flavorless sweet - it's more like good honey, where the intense sweetness is accompanied by equally intense flavor. It's what I think of as a "fur coat" scent, like Daim Blond, though while Daim Blond is a pale fur, this one is dark. And both furs are definitely worn by women.

Then it shifts to more wood, still sweet, but it's no longer easy to tie the sweetness to specific flowers, or even to flowers at all. It's become candied wood, wood soaked in... not honey, but the sap of some syrup-producing tree that hasn't been discovered yet.  Maybe it's a fraction less Proper, but it's still perfectly ladylike.

And it seems to be sitting there, several hours later - there are gentle shifts between the notes, but I'm not getting the animalic frenzy that I rather expected. If it does turn up, I'll be updating.

Meanwhile, this is a very fine addition to the When Perfume Was Perfume collection. I'm pleased.