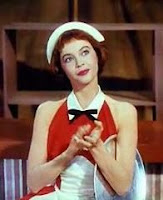 (Yes, we did spend a lot of time at Stanford Theatre this weekend.)

Long, long ago, in junior high, we did a drama exercise.

The class was divided into groups, each group to select a scene from a pile of classic plays to act out for the rest of the class. We selected a nice little scene about a teenage girl and table manners and marriage and jewelry.  I remember being puzzled by our teacher's uneasy face at the lines

"Marriage is not forbidden to us.
But instead of getting married at once...
...it sometimes happens we get married...
...at last."

(Or, well, the equivalent in the play - those exact lines are, admittedly, from the movie.)

I suspect that the copy of Gigi that we had chosen was stashed away before the next class. Discussion of the training of young courtesans was certainly not intended as part of the teaching points for the day.

When I see Gigi, I always find myself similarly startled that the Hollywood of the 1940's would film this particular theme. Young schoolgirl graduating to a life as a kept woman? Goodness gracious.

But it is, of course a lovely movie. Leslie Caron, Louis Jourdan, Hermione Gingold, Maurice Chevalier, wonderful music, glorious sets and costumes; what more could you want? Leslie Caron, particularly, is impossibly but convincingly charming.

The plot, while it could be seen as terribly predictable, is somehow very satisfying - the movie resists the temptation to labor over explanations or excuses, and instead turns on the emotional decisions of the characters. Musical or no musical, I'll be happy to see this next time it comes up in the Stanford Theatre rotation.

Photo of Leslie Caron (in Lili). Wikimedia Commons.
Posted by Martha at 11:57 PM