Perfume: A basket of quick sniffs 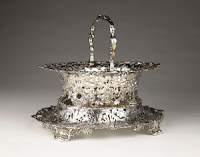 I've been wearing perfume without reporting back. Shocking. I'll probably review these properly someday, but as I laze around on holiday vacation, I'm going to record my first impressions.

Sylvia Grojsman 100% Love didn't quite hit the right note for me. The vanilla and chocolate were lovely, but the roses and berries seemed to clash with them, rather like... like... OK, I don't know what like. To quote Buffy, "un-mixy things." I did enjoy the drydown, but I don't like having to wait for a clashing note to go away.

Parfumerie Generale Gardenia Grand Soir was just as lovely as it was the day I tried it in the shop--before I broke all rules and bought it the same day. But I didn't have any new thoughts about it.

I ordered a tiny 2ml decant of Mary Greenwell Plum because I remembered it being mentioned fondly more than once by Mals over at Muse in Wooden Shoes. The initial fruit note was exactly what I wanted--an idealized plum, or perhaps plum jam. Dark and intense but not sweet. But then the aldehydes came out, simultaneous with the thought, "Doesn't Mals refer to herself as an Aldeho?" and indeed she does, and Plum lost me for the next hour or so. The drydown turned likable again, but I think that this one is too grownup for me.

Montale Chocolate Greedy was a nice enough vanilla with just a dusting of chocolate. It brings to mind chocolate meringues or other chocolate creations that depend on cocoa rather than melted chocoalte for their flavor. Perfectly nice, but not what I had in mind. Is chocolate always either a fleeting note (Cacao and Guilt) or a dusty background presence (Greedy)?

Lady Stetson was pretty nice, and that's all I remember.

Sung by Alfred Sung was not what I expected. I expected green; I got only the faintest hint of galbanum trapped behind prickly thorny flowers, followed a good while later by knee-deep powder. Meh.