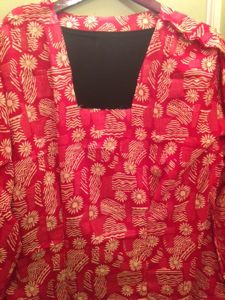 I packed away the drop-shouldered high-collared blouse pattern that I was whining about in the previous post. But then I started to think about it. In the pattern photos and drawings, the bodice and sleeves looked as if they might be a nice, comfortable, but not excessively shapeless core for a blouse. And there's no law that says that I have to keep that high collar. Or any collar.

So I pulled it back out again and started Frankenpatterning it. I started with View B and:
Still on this pattern's agenda:
Whatever I do with darts and pleats, the pattern is much simpler now. No opening. No collar. No cuffs. If I really do like it and wear it, it could be a good subject for experimentation--binding, facing, piping, and so on. The front pleats also give it some flexibility in terms of wearing ease--I can make them deeper for less ease with heavier fabrics and shallower, or removed altogether, for lighter fabrics. In theory.

I think I'm pleased, but I can't be sure until I make a full-fledged wearable version. That may be this one, with a recut back, or I may move on to a third muslin. (The first one, in a heavier green fabric, didn't survive for a photo.)