Fashion: What I Wore Monday 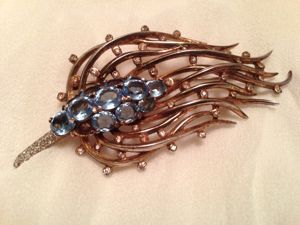 Why am I telling you this? Because I want to record my tentative fashion forays in words. I can look at a picture of clothes and say, "Ooh, pretty!", but that visual experience is unsatisfying; I need to ask questions and answer questions and ramble and enthuse. Why is it pretty? Why does it work? What does it mean? Hey, my grandma had a coat like that!

I was all matchy on Monday, or at least color-themed. I think that matchiness is out of style nowadays--"nowadays" being, oh, post-1987. But I enjoy it. Enjoyment of my clothes, of any kind, motivates me to "dress"--to wear a planned combination of clothes rather than grabbing a random tee and a pair of Mom jeans.

"Combination of clothes." Heh. I dislike the word "outfit". Because it feels girly? Because it's part of the fashion world that I've rejected up to now? Because Mom's outfits were set in stone, so that poor malachite necklace was forced into a permanent monogamous relationship with that slightly-faded boatneck top, never to see the world in any other company?  But I can't think of a better brief way of describing, "a planned combination of clothes." It's a useful word.

So. What is there to say about Monday's (gulp) outfit?

Most significant to me was the fact that the skirt was short. Short-for-me; just about at the knee. In the past few years my skirts have been drifting longer and longer--I often need to lift them in order to descend stairs without tripping. It was liberating, pleasantly weird, to display the bottom half of my legs to the general public.

My slate-blue legs. Hosiery is another area where I've rarely stepped past the entrance hall of the feminine universe. When I wear a skirt, I'm usually wearing black tights, the sturdy kind that hold up to many washes. Once in a while, it's beige tights. When I was in Portland, I bought myself a pair in slate blue and another in a sort of tweedy gray. (Such daring!) I eyed the fishnets and polka dots longingly; I really think it's only a matter of time, maybe very little time, before my legs are (occasionally) patterned.

That will require that I learn to launder less-sturdy hosiery, however. Or that I become fabulously wealthy so I can just throw hose out after one wearing--a policy that sounds less shocking when you consider that the things seem to be built to ensure that you only get one wearing anyway, which is part of why I went to the sturdy tights in the first place.

Um. What? Oh, yes. Laundry. And the whole topic of maintenance. "Dress"ing requires that I do some maintenance on my clothes, and for a person who rarely even bothers to snatch things out of the dryer before the wrinkles set, that's a pretty big demand.

The other significant fact about Monday is that both my shirt and my skirt fit me. I tend to wear clothes so large that I can pull them on without un-doing the fastenings, so large that when I change position, such as sitting down so that the stomach is repositioned in a poofier way, the fabric just gives way without offering any resistance whatsoever. I think that this is what people mean when they sometimes say, "I don't like my clothes to touch me." Monday's clothes touched me. Aiee!

Clothes that "fit" are often less comfortable than clothes that are wildly oversized. And that's a big element of my past resistance to fashion--why would I want to wear uncomfortable clothes in order to look better for other people?  I find myself wanting to rush off and find quotes on the topic. C.S. Lewis in The Chronicles of Narnia, on the idea that your "best" and most festive clothes should be your most comfortable. The Little Mermaid, with all those words about beauty requiring pain. An Episode of Sparrows, where Lovejoy's pride drove her to wear her best shoes long after she'd outgrown them.

OK, that's probably another post. Right now my pain-for-beauty issue is all about shoes. (Well, and earrings, but that's also another post.) Heels. Like many women who are sufficiently plus-sized to have trouble finding the clothes they want, I love cool shoes. I just love them in the abstract, because I'm not willing to have uncomfortable feet. I would love to be able to wear heels wherever and whenever, but I'm just not sure if I want to endure the pain required to get "used to" them.